Win of the day honours looked to be sewn up when King Of Hastings went past Big Parade and held off Bandersnatch despite travelling deep throughout with 59kg, however, enter Sacramento over 1800m two races later.

The four-year-old gelding, in the care of Gai Waterhouse and Adrian Bott, simply refused to lose. Punters Intelligence sectionals show that surprise race leader Notabadidea charged along out in front which forced Sacramento to clock a slick 1:13.55 for the first 1200m.

It won't be the last time this son of Pierro will be fighting out a finish over the coming months.

On the aforementioned Bandersnatch, there was merit in his fast-finishing second given he was coming back from 1400m to 1200m.

Now with Team Hawkes, the four-year-old indicated that another win is immanent over a touch further. He was the only runner in his eight horse field to break 34s for the last 600m (33.82s) and he was particularly strong through the line with an 11.81s last 200m. 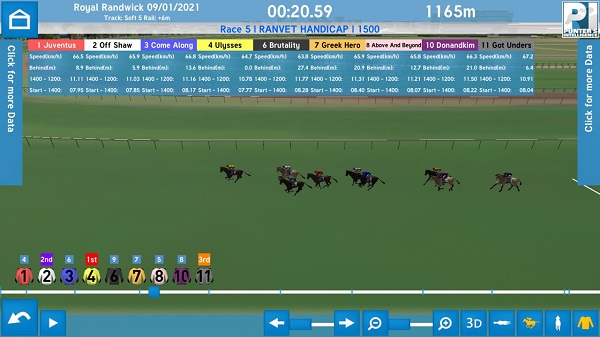 Meanwhile, connections of Brutality were left ruing what could have been after the Joe Pride-trained gelding became detached from the field in the early stages of the race.

The leader Ulysses was never headed. At it's furthest point, Brutality gave away 27.4m. He rattled home with a sustained 800m close with his last 600m split of 34.43s a whopping four lengths faster than the next best.

Expect him to atone in a similar race next time as he has clearly come back a better horse this preparation.

The same can be said for Jason Coyle's improved galloper Chateaux Park. Still only a 57 rater, there are wins coming soon for the Ocean Park gelding.

He charged home behind all-the-way-winner Zing with a last 600m of 34.85s, which was near two lengths quicker than the next best. The timing might be right to give Chateaux Park a crack at a middle distance journey now.

Finally, if you only have room for one blackbooker from Randwick's Saturday meeting, the spot belongs to Godolphin's Subedar. First up after 60 weeks on the sidelines, he returned with a barnstorming second behind Les Bridge's talented type and $1.45 pop All Time Legend.

It was as good on the clock as it was to the eye. Punters Intelligence details a 33.99s last 600m from the tail of the field, two lengths quicker than the next best, and while he wanted to duck in late his last 200m was still a nimble 11.55s.