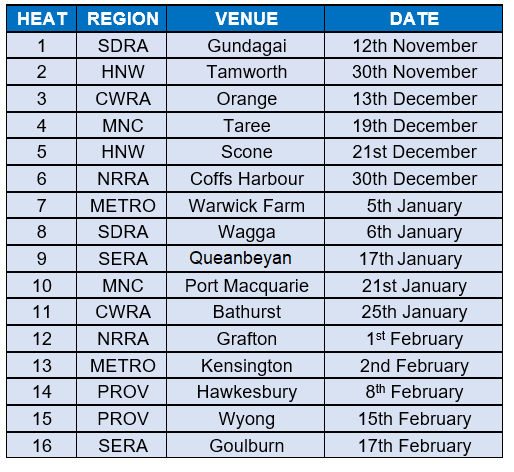 1. The Series is open to NSW and ACT indentured apprentice riders who are enrolled at Racing NSW Apprentice Schools.

2. Preference will be given to apprentice riders who, in order:

Riders from Category (ii) and (iii) may ride in a heat but may not attain points. Individual awards for heats shall be made to the highest placed rider from Category (i).

In the event that there are insufficient qualified apprentice riders available on the day of a series race, after confirmation from the Racing NSW Training Dept, Stewards may permit an Interstate Apprentice Jockey who does not qualify under Category (ii) to ride. These riders may not attain points.

3. The Rising Star Racing Colours will be carried by the apprentice leading the series at the time the heat is run, or if the leading rider is not competing, the topweight will carry the colours.

4. Points will be awarded for each race on the following basis:

(i) First Place - 7 points; Second Place - 5 points; Third Place - 3 points; Fourth Place – 2 points; All other placings - 1 point
(ii) In the case of a dead heat, the effected placing's points shall be added together then divided by the number of dead heaters.
(iii) If an apprentice is declared for a ride and the horse is subsequently scratched, the apprentice will gain one point.

6. All heats will be restricted to 12 starters.

7. At the conclusion of all scheduled Series Heats, the rider who has accumulated the most points will be declared the Rising Star Series Champion.

(i). In the event of more than one rider finishing on equal points after the last Heat, a count-back will occur. The Apprentice with the most race wins, and subsequently the most 2nds then 3rds within the series will be declared the outright winner.

8. Racing NSW can amend the Rising Star Series Conditions at any time, to ensure equal opportunity for all participants.