Newnham Full Of Confidence For Quintessa At Hawkesbury (Thursday)

But he will be a part-time “couch potato”, cheering on both Quintessa ($7.50 on TAB) in the Listed Lander Toyota Ladies Cup (1600m) at Hawkesbury and Miravalle in the Oaks (2500m) at Flemington. 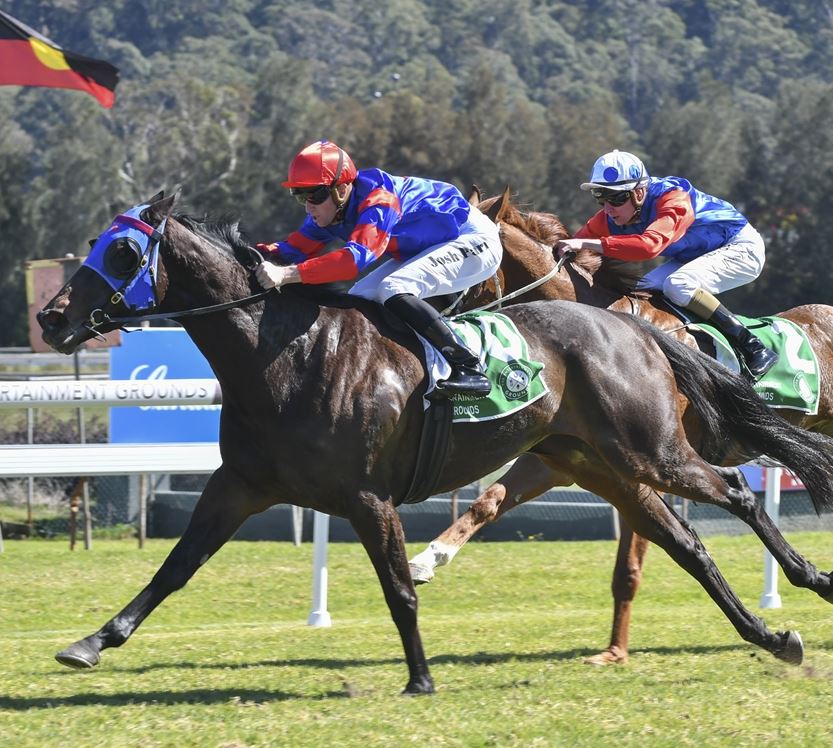 Quintessa (Josh Parr) on her way to victory at Gosford. Image by Bradley Photographers

Newnham, who has stables at Randwick and Warwick Farm, won’t be at Flemington because of the restrictions surrounding the COVID-19 pandemic, and has decided to watch both his “girls” in the comfort of home.

“I’ve got plenty to do tomorrow, and both races being late in the afternoon and only a short time apart, home will suit fine,” he said this morning.

“I’m looking forward to both the Ladies Day Cup and the Oaks, and I’m confident both Quintessa and Miravalle will run well.” Flemington is at 5.10pm with Hawkesbury’s feature race at 5.30pm.

Quintessa (Rachel King) is currently at $7.50 in an open Hawkesbury affair, and Miravalle (Craig Williams) is a $6.50 third favourite for the Oaks.

Newnham is trying his hardest to get a black type victory on the board for four-year-old mare Quintessa, who races for the Kolivos family’s Lightning Thoroughbreds breeding enterprise in the same colours as her five-times Group 1 winning sire Pierro.

“She has been placed at both Group 1 (third in this year’s ATC Oaks to subsequent Golden Eagle winner Colette) and Group 3 (third also to her in the Adrian Knox Stakes a week earlier) level, and a Listed win at Hawkesbury tomorrow would certainly add to her value as a future broodmare,” Newnham said.

“This looks a suitable race for Quintessa, who can handle soft ground and has freshened up nicely since her last run in the Craven Plate (2000m) at Randwick on October 17.

“She was disadvantaged that day at weight-for-age and also wasn’t suited making the pace. We’ll ride her in behind tomorrow, and I’m sure she can make her presence felt.”

Newnham has been in great form at Hawkesbury early in the season, preparing five winners, and Quintessa’s rider King won the jockeys’ premiership there last season and has already notched six winners at the provincial track this season.

Quintessa has the advantage of experience on the Hawkesbury track, having finished a close second to Entente in a Maiden Plate (1800m) on soft ground in March, when her trainer considered her a “bit unlucky”.

“All three have good chances,” Newnham said. “Happy Candy is in good form and won on heavy ground over 1500m at Hawkesbury in July.

“Montserrat is an ex-Godolphin horse who has raced twice for us since being purchased by Darby Racing, and improved at his latest start when third to subsequent Kensington winner Wairere Falls in a Benchmark 64 Handicap (1500m) at Hawkesbury on October 22.

“He is out of a Zabeel mare, so stepping up a little further in distance shouldn’t be a worry.

Aeecee Vinco has to hump 60.5kg after Schiller’s 2kg provincial claim, but his trainer isn’t concerned: “The weight doesn’t worry me in these Benchmark races; I’ve had a bit of luck in them lately with higher-weighted horses,” Newnham said.

“Aeecee Vinco has been placed at both Hawkesbury starts and will appreciate the softer ground. He ran into a smart one there last start when third to Belluci Babe over 1000m on October 11.”

Warwick Farm trainer Jarrod Austin has settled on the Ladies Day Cup for his $5.50 joint favourite Looks Like Elvis, with Nash Rawiller a new rider.

Austin withdrew the gelding from both the $500,000 Rosehill Gold Cup (2000m) last Saturday and yesterday’s Listed Furphy Plate (1800m) at Flemington when he drew poorly on each occasion.

Looks Like Elvis, a splendid fifth to Probabeel in the Group 1 Epsom Handicap (1600m) at Randwick two starts back, shares early favoritism with Team Hawkes’ Archedemus (Koby Jennings, $5.50), who will race in visors.

Chris Waller has five runners; the same number he had in last year’s Ladies Day Cup when Mitchell Bell scored for him on $31 outsider Cellarman.

The rail is in the TRUE position for tomorrow’s meeting, and a Soft 7 rating was posted this morning, with a penetrometer reading of 5.75.