Brad Widdup has no doubt Sally’s Day will be hard to beat at Hawkesbury tomorrow if she replicates her trial form.

Unbeaten in four trials, the lightly-raced More Than Ready filly is yet to show that in two starts to date and lines up in the Lander Toyota Maiden Handicap (1100m). 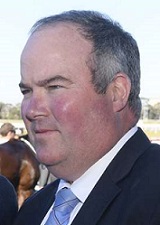 Sally’s Day has started favorite at both city assignments against her own sex and failed to fill a place – but there have been forgivable circumstances.

Kerrin McEvoy rode Sally’s Day in the latter race and afterwards told stewards that after the filly began only fairly, he rode her positively to settle outside the leader (and eventual winner) and travelled strongly for the majority of the race.

He felt the early effort of racing forward and the manner in which she travelled contributed to her weakening over the last 100m.

Widdup, Hawkesbury’s leading trainer with 29 wins this season, subsequently took Sally’s Day back to the trials and she won a 794m heat at Warwick Farm on April 1 with seemingly something in reserve.

“She has drawn nicely tomorrow and we’ll ride her with cover,” Widdup said.

“There’s no doubt she has ability. If she brings her trial form to the races, I’m confident she will be hard to beat.

“It’s been a really strong season for two-year-olds and no races have been easy to win. Villami, who won that Rosehill race, ran third in a Group 2 (the Percy Sykes Stakes) at Randwick last Saturday.”

Grant Buckley has tomorrow’s mount on Sally’s Day, who is the early second favorite behind the Gai Waterhouse and Adrian Bott-prepared Single Blonde (Tommy Berry).

The tongue tie comes off Single Blonde, who has been placed at both her starts to date – including the Listed Calaway Gal Stakes (1110m) at Doomben last December – and is the third hotpot punters will face up to in the opening events.

Stablemate Pinup Miss (Blake Shinn) is at very short odds for the TAB.com.au Maiden Plate (1600m), and Godolphin’s Gorgons (Jason Collett) is also at odds-on for the Sky Racing 3YO Maiden Handicap (1100m), reappearing after a lengthy absence from the racetrack.

Widdup has two other representatives at his home track meeting, and is looking forward to both last start winners also performing well.

Hinchinbrook filly Lagarde was placed on nine occasions – one of them the $250,000 Magic Millions Maiden (1200m) at the Gold Coast in January – before going bush and breaking through comfortably in a 1000m Maiden Plate at Orange on March 24.

“I’ve stuck to the same pattern of keeping her fresh as we did leading into Orange,” Widdup explained.

“I feel that suits her best.

“She has drawn awkwardly, but has good speed and there is only one turn to negotiate.”

Lily Astolat, a Camelot three-year-old from a Street Cry mare (Whippy Van), shed her maiden status over 1600m at Wyong on March 30 at only her third start and is jumping sharply to tackle a Class 2.

But her trainer believes both the additional distance and bigger track will suit his filly, and is testing her for a Brisbane winter carnival trip.

“Lily Astolat did a good job to win at Wyong, and definitely needs a big track,” Widdup said.

“We’ve been able to get Corey (Brown) to ride her tomorrow. There isn’t a better rider of stayers.

“Tomorrow is D-Day for Lily Astolat in regards to a possible Queensland trip. She needs to race well to go north for the Gold Coast Bracelet (1800m) for three-year-old fillies on May 4.”

John O’Shea has opted to put blinkers back on China Gale (Berry) in Lily Astolat’s race, and Canberra trainer Matthew Dale is hoping to continue his weekend hot streak with Belfast Bella (Collett) in the same event.

Dale scored with No Doubt Ma’am and Tribbiani at Goulburn last Saturday, and Animalia at Wagga yesterday.

Former French mare Belfast Bella was placed twice over 2200m and 2400m in her homeland before coming to Australia, where she has won twice; over 1400m at Wagga and 1435m at Moruya last year.

At her last start, she ran a close second to Subban in a Benchmark 65 Handicap (1600m) at Canberra on March 23.

All the fields, form and replays for Tuesday’s Hawkesbury meeting