Nash Rawiller was quick to credit the owners for Sweet Deal’s success in Newcastle’s $1m TAB Hunter (1300m), with the six-year-old instead playing the “stalker”.

Rawiller had already won four races on the John Thompson-trained mare and the champion jockey couldn’t hide his admiration for her having chased down a gallant Special Reward. 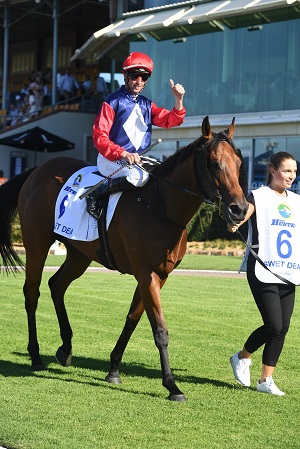 “She has been in great form, just hasn’t had a lot of luck, full credit to the owners, they were adamant to ride her with a sit today,” said Rawiller.

“To be honest, it’s probably one of the first times we’ve found a race where we have been able to ride her like that, let her stalk and we know how brilliant she is when she can do that.

“It was great to see her bounce back like that, she is already a Group Three winner here and to come out and win a million dollar race is exciting , especially to do it on her.”

Rawiller let the speed go in the early stages of the race to settle three pairs back on the fence but when the field started to fan on the home turn, and he got the back of Special Reward, she accelerated quickly, posting a 33.24s last 600m, the quickest in the race ahead of Evalina (33.32s).

“She is a horse I’ve always had a lot of confidence in, I’ve done some crazy things on her because she can get you out of trouble. She is a little bulldog,” said Rawiller.

“Special Reward kicked well and it was a perfect scenario where she had a bunny to chase.

“She was my first Saturday city winner back from Hong Kong and she has kept raising the bar as she has gone along.”

Thompson revealed that Sweet Deal, a winner now of 10 races and $1.3m in prize money, was nearly retired to the breeding barn.

“Thank god she’s here as the owners were talking about retiring her last year, so I’m glad we went another 12 months,” Thompson said.

“She runs well for Nash, that’s the way to ride her, she relaxes with cover and attacks the line. She is a lovely mare and will be back for one last hoorah in the autumn.”

Check out the results and replays for The TAB Hunter meeting at Newcastle.