One was expected and the other a little unexpected ... but it added up to a weekend double for Hawkesbury’s leading trainer Brad Widdup.

And both lightly-raced winners look to have nice futures.

Widdup took his tally for the season to 15 with the victories of Adelong at Kembla Grange on Saturday and Deepfield’s Paine at Hawkesbury on Sunday. 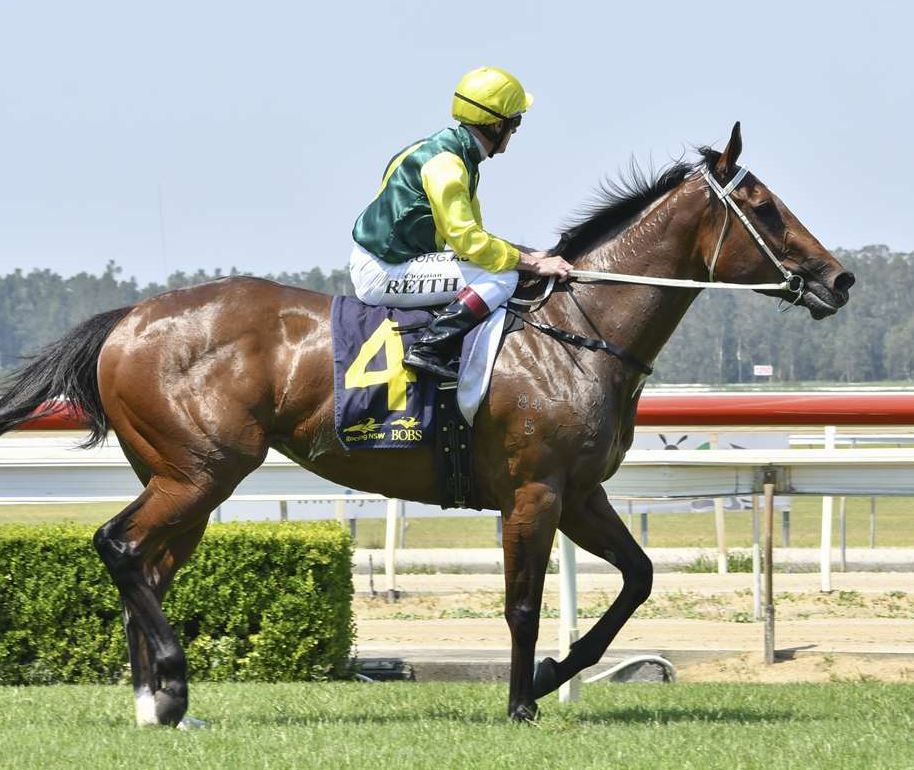 Adelong and Christian Reith return following one of her wins. Image by Bradley Photographers

Adelong ($5 joint favourite) made it two wins from as many starts with a narrow but nonetheless impressive performance to land the Benchmark 64 Handicap (1200m).

Four-year-old Medaglia D’Oro mare Adelong, sold online for $10,175 through Bloodstockauction.com earlier this year as an unraced three-year-old, won a Wyong Maiden (1100m) on debut on November 29 and showed her qualities by successfully progressing to a Benchmark 64 at Kembla Grange.

Adelong sat outside the leader Oneness as the pair poured on the pressure, clearing out before the home turn.

As Oneness tired, Adelong raced to a handy break and fought on gamely to hold out Satin Socks ($6.50) and Crafty Tycoon ($18).

“She did a terrific job to win and is certainly progressing the right way,” Widdup said. “We will probably now have to look for a suitable midweek race in town for her.”

Adelong is out of a Redoute’s Choice mare (Snowgums) and so is today’s winner Deepfield’s Paine.

The Deep Field three-year-old is the third foal of the unraced Redoute’s Choice mare Cleo’s Raine (a daughter of NZ Group 1 winner and nine-times Australian Group 1 placegetter Our Egyptian Raine).

The colt’s breeder-owner Mal Russell entered him for last year’s Magic Millions yearling sale (Lot 619) at the Gold Coast, but withdrew him.

“Deepfield’s Raine is a good type of horse, but laid-back,” Widdup said. “I wanted an experienced rider on him because of that, and booked Glyn Schofield.

“It was his first ride for me, and he was impressed with the colt, especially in view of his inexperience.

“I would have been happy to see Deepfield’s Raine run on and perhaps snatch a placing, and a win was indeed a bonus.”

Wide on the home turn, the colt surged home to beat $3.60 favourite Charm Offensive and another local, Matthew Vella’s De Grawin ($3.80), who was also making her debut.

Cleo’s Raine has subsequently foaled colts by Adelaide (two-year-old) and former Japanese star Maurice (yearling), and Russell has also given the former to Widdup to train.

Meanwhile, classy filly Akari is back in work with Widdup. The lightly-raced Snitzel three-year-old clinched a hat-trick with an outstanding performance from the outside barrier (15) in the Listed Desirable Stakes (1400m) at Flemington on November 5.

Widdup is looking to aim Akari at the Surround Stakes (1400m) against her own sex at Royal Randwick on February 29. Now carrying Group 1 status, the Surround is for three-year-old fillies at set weights.