Hawkesbury trainer Daniel Robinson is banking on an important gear change turning around Karmazone’s fortunes on home ground on Sunday.

Winkers come off and on go blinkers for the Richmond Hotel Benchmark 64 Handicap (1800m). 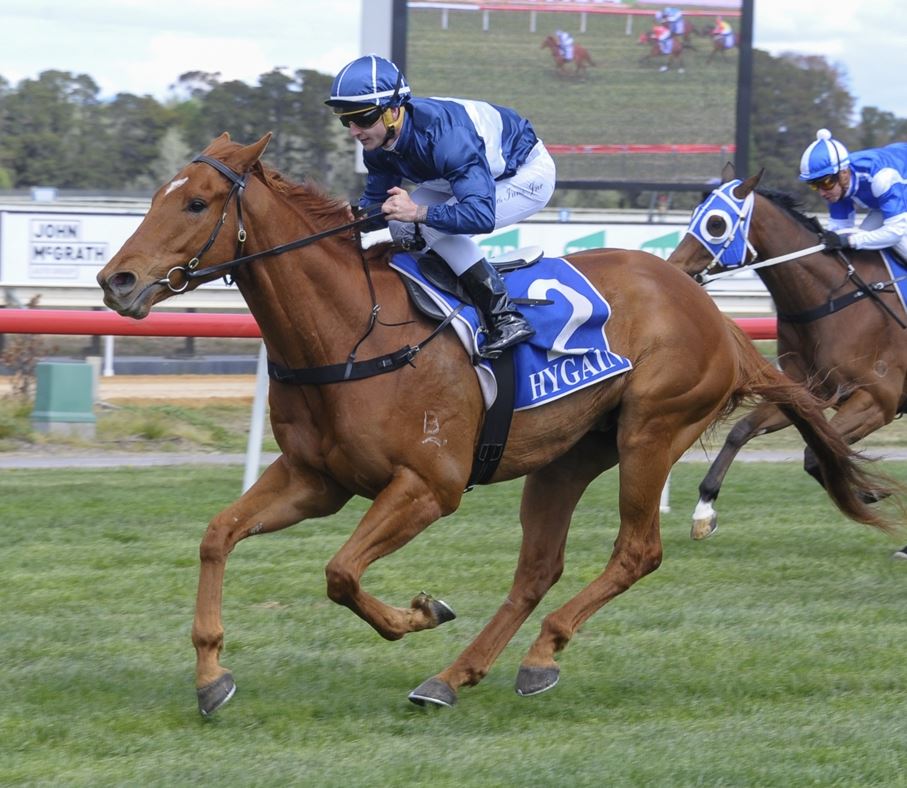 Karmazone ($4 favourite on TAB) won his first two starts at Orange and Canberra – the latest in October 2019 in a 1400m Class 1 Handicap – but hasn’t been successful since.

He has been placed five times, including three in town, and also ran terrific races when just behind the placegetters in heats of the Provincial Championships at Hawkesbury and Kembla Grange last year.

Karmazone, who has raced only 14 times, indicated he is on song to return to the winning list when an excellent third to Niyami in a Benchmark 72 Handicap (1550m) at Canterbury on May 26.

Newcastle apprentice Louise Day rode him then, and retains the mount on Sunday, meaning the gelding rises 4.5kg for the drop in both class and back to provincial company.

“I’ve always felt Karmazone would be a blinkers horse,” Robinson said this morning.

“But I wanted to be sure he was mature enough to handle the change, and now is the right time.

“I probably regretted not having them on him at Canterbury last time when the field fell away with scratchings, and the 1550m was a bit short anyway. I’m really happy with Karmazone, who is in great order.

“It will be a testing track by the time the last race comes around on Sunday; probably similar to when he finished fourth (beaten less than a length) in our heat of the Provincial Championships in March last year.

“The recent floods affected us and, being basically a break-in stable, we gave our horses a bit of a break. But I wanted to get Karmazone up and going again, and he has worked nicely in blinkers since the Canterbury run.”

Trainers’ premiership pacesetter Mark Newnham has two runners and one of them, Bob (($7.50), will oppose current $4 TAB.com.au favorite Karmazone in the Benchmark 64.

Newnham’s other runner Kittyhawk Flyer is $3.20 favourite for the opener, the Bert Heterick Memorial 3YO Maiden Plate (1000m). Sam Clipperton will ride the stablemates.

Newnham, with 13 Hawkesbury wins so far, holds a four-win advantage over Newcastle’s Kris Lees, who also has dual representation. He starts odds-on favorite Snitzari ($1.75 in the Blakes Marine Benchmark 64 Handicap, 1000m) and imported mare Loolwah ($6.50), another rival for Karmazone and Bob in the 1800m Benchmark 64.

Local trainer Garry White has booked him for five mounts; Pending, War Cabinet, Alvin The Bold, High Academy and My Girl Ruby. McDougall’s other mount in American Salute for Matthew Smith, in the 1000m Benchmark 64.

Hawkesbury this morning was rated a “Heavy 8” following 10mm of rain yesterday, though fine weather is forecast for the weekend. The rail is 3m out from the 1300m to 450m, and in the TRUE position for the remainder.