Never Talk ($1.95 favourite) rounded off a treble for Newcastle premier trainer Kris Lees when she won the 900m Yarraman Park Benchmark 64 Handicap by a length.

The three-year-old was undefeated in her only two previous starts during the winter. 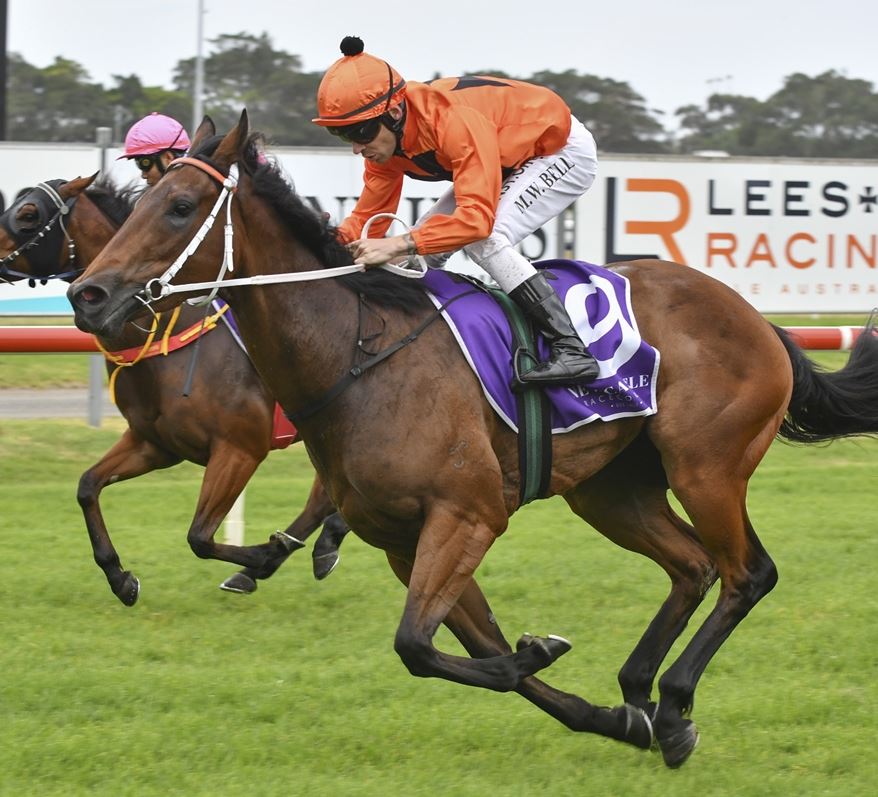 She won on debut at Tamworth on May 31 and then on June 14 on a heavy 10 track at Muswellbrook, Never Talk bolted in by close on five lengths. Lees then sent her for a spell and she had two recent barrier trials in open company fields.

Bell had never ridden Never Talk in a race or a trial: “I knew there was a rap on the filly and I was told she was ready to win first up. She kicked out in the barrier and when the gates opened, she had no interest and tailed off a length behind the field.

"Never Talk started to pick up on the turn and I knew she could finish over them when I could get her into clear running. The filly sprouted wings late and it was a remarkable win.

"Unbeaten in three starts and more to come, a talented filly with a bright future,” Bell said. Never Talk is raced under a lease by two Newcastle Jockey Club syndicates and Kris Lees.

The trainer's other two winners were Triple Ace and Perfect Radiance and are very talented.

Triple Ace ($1.85 fav) was first up from a spell in the 900m Maiden Plate and the colt hit the ground running and he was never in danger winning by more than a length.

The three-year-old raced by Le Romain’s owners and the trainer's wife Kristy, impressed jockey Jeff Penza: “He is pretty smart that colt. His last 600m was quick,” Penza said.

Lees’s three winners were ridden by different jockeys and Group 1-winning hoop Christian Reith was aboard the Gooree Stud filly Perfect Radiance, an ultra-impressive winner of the 1250m Class 1 Handicap. The three-year-old was an easy winner on debut at Newcastle in May before finishing fourth to Peltzer at Randwick.

The daughter of Snitzel resumed from a spell on Saturday and Reith put her in the box seat from the outset. He eased her around the leaders at the top of the straight and the filly gathered the leaders in to win convincingly.

Reith placed a rap on Perfect Radiance: “She always travelled like a winner and there is so much improvement in her. She is a beautiful strong built filly with a good pedigree, an armchair ride and very impressive,” Reith said.

Aaron Bullock’s great start to the current season continued on Saturday when he landed a double. He brought the Richard Litt trained Shaddy from well back to win the opening event the 1200me Maiden Handicap.

Bullock then produced a smart tactical ride to win the 2350m Class 1 & Maiden Plate aboard the Kylie Gavenlock-trained Dundee. He has ridden 21 winners already this season.

View the full results with race replays for Newcastle here