Mayfield-Smith and his wife Emma have sold their property – which includes a residence, 30 stables, a horse walker and paddocks – opposite Hawkesbury Racecourse, and are looking forward to beginning a new chapter in their lives.

In no way though is the 62-year-old trainer of three decades’ experience retiring. 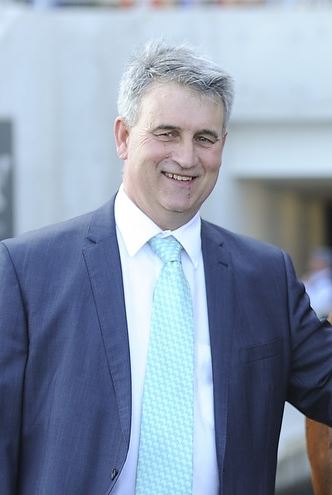 “Age has never been a barrier to me, and fortunately I have enjoyed good health,” Mayfield-Smith said, announcing his impending move to become a country-based trainer. “Emma and myself like Coffs Harbour, and we are excited to be moving there.

“We have negotiated a new set of stables and it will be like starting up again and hopefully building up a good team.”

Mayfield-Smith, despite winning five Group 1s (Angst, Landsighting twice, In Top Swing and Famous Seamus), currently has only three horses in work and may have saddled his last runner from his Hawkesbury base when he won with Invictus Felix at Friday’s Orange Cup Showcase meeting.

Invictus Felix ($6), ridden by Jeff Penza, bolted away with the Class 1 Handicap (1400m) by three and a half lengths, posting his second win at his 11th start. The four-year-old is raced by long-term stable supporters Jim and Janice Simpson, who also raced Famous Seamus, one of the trainer’s Group 1 successes.

“We go back a long way,” Mayfield-Smith said. “Jim and Janice had a horse with me after I took out my licence and started training at Newcastle in 1991.

“It was great to get another race for the Simpsons with a homebred out of a mare (Lysistrata) I also trained for them, and I’m confident he has more wins in store from our new base at Coffs. There will no doubt be opportunities in TAB Highways in town.”

Mayfield-Smith explained his decision to become a country trainer was prompted by the continuing lack of opportunities in spite of his status as a No 1 trainer.

“My clientele is getting older and syndicates generally prefer to place their horses with younger high-profile stables,” he said. “The late Bill Fisher, who died eight years ago, had a lot of horses with me and you simply can’t find another big owner such as he was.

“Country trainers have never been better off. Apart from increased prizemoney and Showcase meetings, there are the TAB Highways along with the Country Championships and The Kosciuszko.”

Mayfield-Smith began training at Broadmeadow with only one horse; an Argentinian import named Dismasted who previously had been prepared by his brother Brian, the man who ended the legendary TJ Smith’s distinguished 33-year reign as Sydney’s premier trainer.

“Dismasted had issues, and he was my first winner at Taree in November 1991,” he said.

Mayfield-Smith’s Group 1 breakthrough came with the ill-fated Angst, who died after winning seven of her only 10 starts. She clinched Sydney’s “Princess Series” for three-year-old fillies by winning the 1993 Flight Stakes at Royal Randwick.

He later moved to Hawkesbury and won a further four Group 1s; the 2000 Stradbroke Handicap at Eagle Farm and 2001 George Ryder Stakes at Rosehill Gardens with Landsighting, 2003 Caulfield Guineas with In Top Swing and 2014 BTC Cup at Doomben with Famous Seamus.

The Mayfield-Smiths are horse lovers and take great pride in caring for their retired Group 1 performers. They will take both In Top Swing and Famous Seamus with them to Coffs Harbour, but lost Landsighting last December from a colic attack.

“It was all very sudden and tremendously sad to lose a wonderful horse who had been so good to us,” Mayfield-Smith said.