White’s lightly-raced filly Timely Shadow hoisted him back into the winner’s list for only the fourth time this season, and King extended her lead as she bids to become the first female to win the Hawkesbury senior riding premiership.

Having only her fifth start, Uncle Mo filly Timely Shadow ($6.50) came with a determined run wide on the track to beat $2.60 favourite Mooy in the Ascend Sales and Trophies Maiden Handicap (1500m). 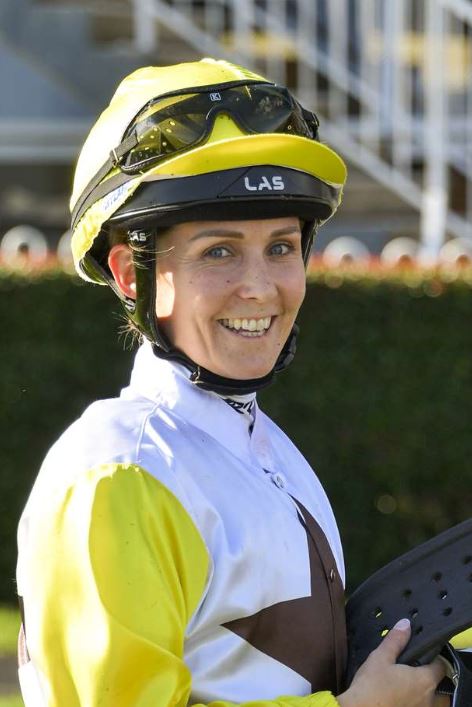 Rachel King after winning on Timely Shadow at Hawkesbury. Image by Bradley Photographers

King’s victory lifted her to 11 wins for the season, three ahead of Tommy Berry (who did not ride because of illness), Jay Ford, Tim Clark and Jason Collett (who won the following race on debutante Flash Point).

The experienced White was happy to help King chase the premiership, giving her mounts on four of his five runners at the meeting.

“Rachel hasn’t ridden much for me previously, but did handle Dunatun a couple of times, including the Scone Guineas two years ago,” White said. “She is intelligent and strong, and a very good rider.”

After 31 winners over the previous two seasons, it’s been a quiet 2019-20 for White – but not one which fazes him.

“We had a good cleanout of horses 12 or so months back, and gave some of the horses we kept decent spells,” he explained. “It takes a while to get them going again. I’ve got a lot of young horses on my books.”

“I considered at one stage recommending to Mr Mapp to sell her, but kept faith in the filly,” he said. “She has come back much better, and her two previous runs were good leading up to the race. I feel she will manage up to 2000m.”

White almost clinched a double when Military Academy ($3.90 fav), with King aboard, was just edged out by Rabbit Clause ($9), to whom he conceded 3kg in the Windsor Rotary Benchmark 64 Handicap (1300m).

“The weight (61kg topweight) probably told, but I consider he is stronger at 1200m,” White said. “Hopefully, we can win a few more races with him.”

White also was pleased with the debut of his Headwater youngster Winds Of War ($6.50), who ran third after being slowly away to Mr Colorful ($6.50) in the Independent Liquor Group 2YO Maiden Plate (1000m), and Paris Of May ($26), who was just pipped for third in the Pink Finss Benchmark 64 Handicap (1000m).

Whilst it has been a quiet time for White in terms of winners, fellow Hawkesbury trainer Terry Croft is celebrating a very successful season. Croft landed the opening event, the TAB Maiden Plate (1100m), with $14 chance Our Fox (Mitchell Bell) to give him his ninth winner of the current racing year.

He had trained seven winners in each of the previous two seasons. Foxwedge three-year-old Our Fox, a $16,000 Scone yearling sale purchase, sat at leader Gallant Run’s heels and was too strong over the closing stages.

“Happy to win for a good group of guys, some of whom are first-time owners,” Croft said.