Brad Widdup has opted to rely on perennial placegetter Uprise on his home track at Hawkesbury on Thursday and considers he is well placed to finally shed his maiden status.

Uprise (Christian Reith) is the early $2.90 TAB fixed odds favorite for the Mounties Group Provincial & Country Maiden Handicap (1300m) where only three other horses are quoted under double figures. 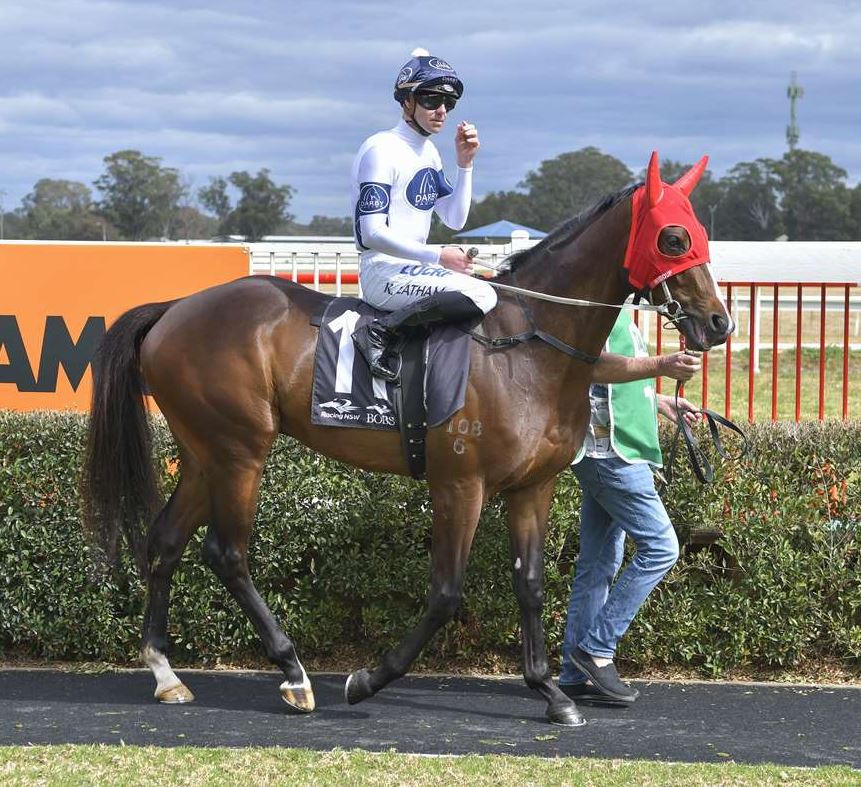 Uprise (Keagan Latham) - is set to break through at Hawkesbury on Thursday. Image by Bradley Photographers

Widdup, Hawkesbury’s leading trainer with 24 overall winners so far this season, also accepted with Daksha ($41), but isn’t keen to run him from the outside barrier in the field of 13.

Uprise, a three-year-old son of Hinchinbrook, is raced by a Darby Racing syndicate and has been placed at six of his last 10 starts; the last three in succession at Bathurst, Newcastle and Wyong.

He tried hard though beaten clearly when runner-up to Aytobe in a Wyong Maiden Plate (1200m) on March 10.

“Uprise looks well placed in tomorrow’s race, and I’m hopeful he can get a win on the board,” Widdup said this morning.

“He isn’t a big horse, but is a really good doer and holds his condition well right through his preparation.

“He weighs around the 445kg mark, and doesn’t lose more than 1kg from the time he comes into work until the time he goes out.

“This doesn’t appear to be the strongest maiden and Uprise is doing well.”

Widdup isn’t as optimistic with his other Hawkesbury representative Stiller (Richmond Irrigation Water Solutions Maiden Plate, 1500m, $12), whom Reith also rides, but expects him to run well all the same.

“It’s only a small field, but he is up against a couple of strong chances ($1.75 favorite Kinane and $3.40 second favorite Perfect Impression),” Widdup said.

Stiller, a three-year-old son of Uncle Mo, has raced only twice and resumed with a second to Azoustic in a Goulburn Maiden (1400m) on March 12: “His run that day was good,” Widdup said.

“Stiller has been a slow maturer, but is a lot better this time in work and continues to improve.”

Widdup was forced to miss Saturday’s Group 2 Tulloch Stakes (2000m) at Rosehill Gardens with Liam’s The Boss when the three-year-old developed a temperature, and is awaiting results of a blood test before determining whether to proceed with his current preparation.

Fellow Hawkesbury trainer Mitch Newman has made both a riding and gear change on Diva Bella ($3.40), the second favorite to Uprise in the Provincial & Country Maiden. Diva Bella will race in winkers, and Adam Hyeronimus replaces James Innes Jnr.

Stewards opened an inquiry into Innes’s ride on the filly, in particular the middle stages, when she finished a luckless fifth as a $1.70 favourite in a Maiden Handicap (1300m) at Orange last Sunday.

Newman took blinkers off Diva Bella at Orange, and has decided to substitute winkers tomorrow. The Reward For Effort filly had been placed at her only two previous starts (at Moruya and Hawkesbury) since joining Newman’s team.

Deamer has done an excellent job with the four-year-old, winning two races along with three seconds from six starts since the gelding was transferred from a leading Sydney stable. Discombe was never threatened when all the way winner of a Class 1/Maiden Plate (1600m) at the Tamworth Showcase meeting on March 8.

Deamer initially accepted with Discombe in a Benchmark 66 Handicap (1615m) at Tuesday’s scheduled Showcase meeting at Coffs Harbour (which didn’t proceed as a section of the track was deemed unsafe following rain), and withdrew him when he drew the outside in a capacity field.

“The Hawkesbury race with a small field presents Discombe with a good opportunity to break into the provincial winning list,” he said.

“The Provincial Championships slate had to be wiped clean when Reiby’s Regent didn’t get a start in the Gosford qualifier (subsequently run at Newcastle),” Jason Attard explained.

“He had to cover ground and Keagan felt he wasn’t comfortable on the heavy ground when placed on the Beaumont Track in late February.

“We’ve had to go back to 1000m with him tomorrow and though it is short of his best, his raw ability could see him run well all the same.

“We have formed a good association with Keagan (Latham), who is a very underrated rider. He has the ability to pick horses up and get them to finish strongly.”

The rail is in the TRUE position for tomorrow’s meeting, and the track this morning was rated a Good 4 with a penetrometer reading of 5.15.

By Neil Evans Track Good 4 and rail out 6m from 1400m to Winning Post and True the remainder Race ...
Read More