Blue Army To Carry Home The Goods At Wyong (Sunday)

James Cummings will send five lightly-raced gallopers to Wyong on Sunday with prospects of winning four of the seven races.

The royal blue of Godolphin will be carries by Canzonet in the opening event the TAB.com.au 3 & 4yo Maiden Plate (1200m).

The four-year-old has been placed in three of his five starts and in his second run this prep he stormed home from midfield to go down by a head at Hawkesbury. 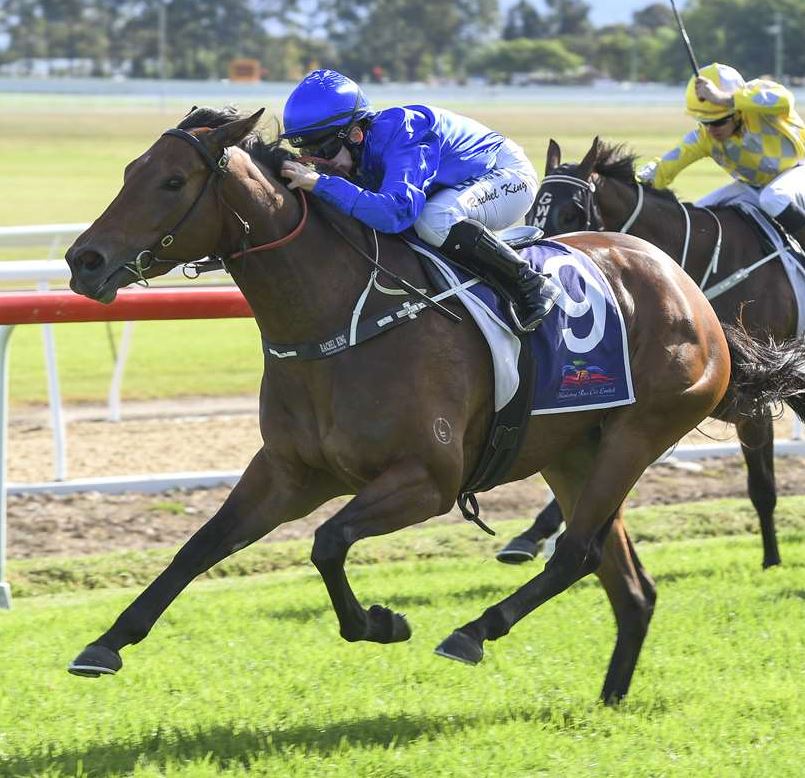 Canzonet has a soft draw and the in-form Grant Buckley has the mount.

Her only win in four starts was at Hawkesbury in May when a short-priced favourite.

Unwanted in the betting at Hawkesbury first-up two months ago, the mare was beaten less than two lengths. She trialled two weeks ago and has drawn nicely with Jeff Penza aboard.

Chanting was narrowly beaten first-up at Newcastle two weeks back in a stronger race and from barrier two looks the winner. Tahuna is on debut and would need to improve on her last trial.

The mare resumed from a spell with a devasting win at Gosford on November 22. She found the 1100m too short when beaten by the smart Crimlet at Newcastle last start.

RACE 1, WWW.TAB.COM.AU MAIDEN PLATE (1200M): Canzonet has the best form and has a plum draw. He has been placed in three of his five starts and has performed well in both starts this prep. He was beaten 1¼ lengths by Phoenix River in a much stronger race at Gosford first-up. Second-up he went down by a head at Hawkesbury after coming from midfield. Monstrosity’s race form is poor but the ‘big boy’ resumes from a spell on the back of two trial wins. Supra Marnium has a place chance.
SELECTIONS: 1 CANZONET, 4 MONSTROSITY, 5 SUPRA MARNIUM

RACE 2, HIT 101.3 FAMILY RACEDAY JANUARY 26 CLASS 1, 1100M: Mandirigma is a smart colt resuming after an easy trial win on this track recently. He won impressively on debut at Newcastle in June then he struck a heavy track in his only other run in the winter and he finished down the track on the Kensington Track. Deepfield’s Raine was impressive in winning on debut at big odds at Hawkesbury three weeks ago and he hasn’t raced since. Belle of Clonmel races well here and she is in good form.
SELECTIONS: 2 MANDIRIGMA, 1 DEEPFIELD'S RAINE, 4 BELLE OF CLONMEL

RACE 3, CENTRAL COAST BUILDING MAIDEN, 1600M: McGraw put the writing on the wall last start on this track on December 12. He raced in second place from the outset and never shirked his task going down by a length and a quarter. Southern Spirit was placed at Newcastle last start after being heavily backed. Flying Mojo has a place chance.
SELECTIONS: 1 MCGRAW, 12 SOUTHERN SPIRIT, 2 FLYING MOJO

RACE 4, RYAN’S METAL ROOFING MAIDEN PLATE, 1350M: Chanting’s only raced twice and her last start on Newcastle’s Beaumont Track was an eye-catcher. She became unbalanced on the home turn then had to be dragged across heels at the 400m before unwinding a powerful finish to go down by a long head in a quality race. She has a perfect draw here. Duneagle resumes after a nice trial and he has been gelding since his debut run. First Crown went okay first-up after a good trial win.
SELECTIONS: 8 CHANTING, 4 DUNEAGLE, 14 FIRST CROWN

RACE 5, CANADIAN CLUB CLASS 2 HANDICAP, 1600M: Fairy Me Home is close to a win after three placings recently. He was narrowly beaten in a better field than this two starts back on this track and he fought hard when third at Gosford last start. Highjacker was narrowly beaten at Kembla last start and he can race on the speed. Judicator had three starts last prep for a win Hawkesbury win and a Wyong placing. He resumes as a gelding and the blinkers first time.
SELECTIONS: 1 FAIRY ME HOME, 2 HIGHJACKER, 4 JUDICATOR

RACE 6, MERCURE KOOINDAH WATERS GOLF & SPA RESORT B/M 64, 1350M: Rebukes was outstanding in winning on debut at Gosford first-up in November. The mare found the 1150m too short last start when she finished strongly. This trip is more suitable and she should race more prominent. She’s Ideel first-up run was very good and she has performed well in all four starts, however, could be unlikely as she raced at Muswellbrook on Friday. Ready’s Girl is up in class but is in good form and was scratched from Muswellbrook for this.
SELECTIONS: 5 REBUKES, 6 SHE’S IDEEL, 8 READY’S GIRL

RACE 7, JIM BEAM BENCHMARK 64 HANDICAP, 1350M: Quick Finance has returned to form recently and he will be hard to beat. He has been runner-up in his past two starts at Wyong and Hawkesbury. He is a front-runner and he has been runner-up in his only two starts on this track. Trengganu is in fine form with a Newcastle win and a Wyong placing in his past two starts. Time Raid returned to form last start and he has a chance again.
SELECTIONS: 5 QUICK FINANCE, 8 TRENGGANU, 2 TIME RAID