Noel Mayfield-Smith is ever a realist.

The five-times Group 1-winning trainer these days has only a small team in work – and nothing of the calibre of his former top performers such as Angst, Landsighting and Famous Seamus.

So his success on his home track at Hawkesbury on Tuesday was pretty special, not only for the fact that it gave him a breakthrough win this year. 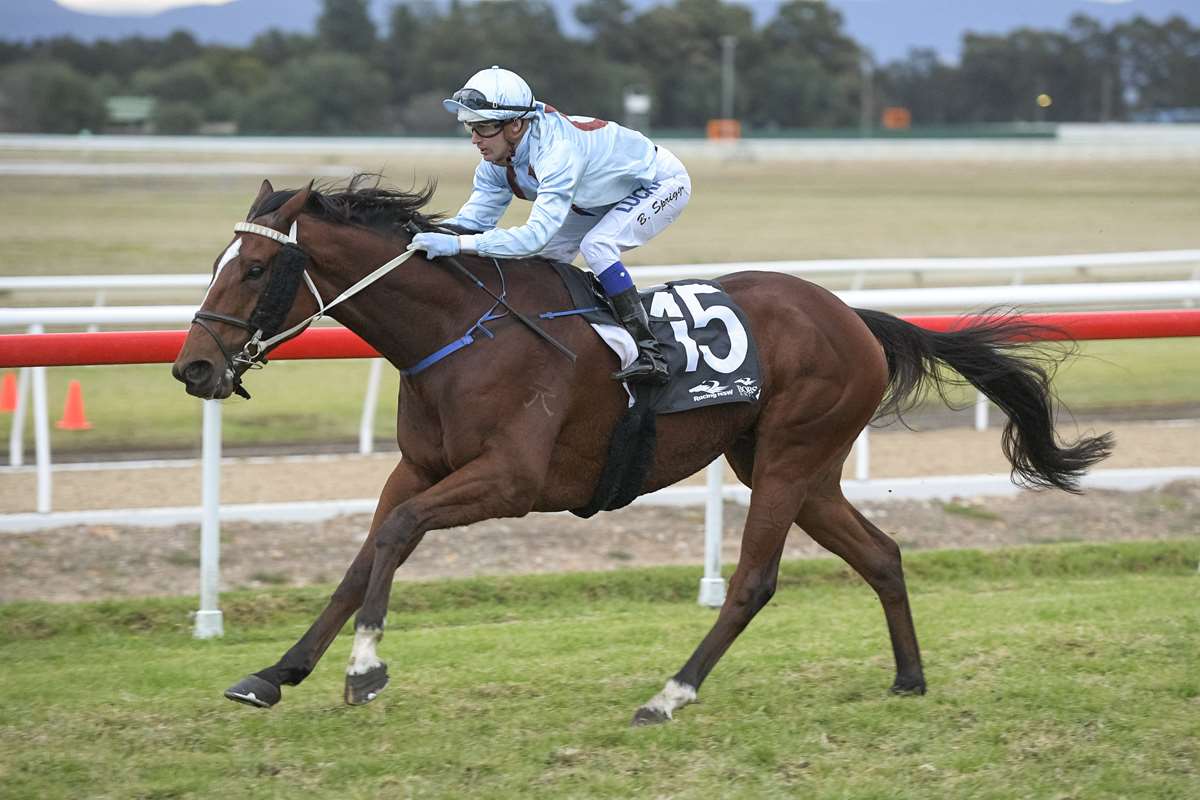 The Pendragon five-year-old and his rider Blake Spriggs didn’t mess about either, scooting along the inside in the straight to score easily from $13 chances Ladies Gem and Lady Evelyn, with $3.30 favorite Dundee Lee fourth.

It was Mayfield-Smith’s fifth winner this season – his first since Polhampton scored at Hawkesbury on November 23 last year – and On Angels Wings has provided two of them.

Mayfield-Smith, who has long held a No 1 trainer’s licence, left Hawkesbury on Saturday morning with a confident feel after On Angels Wings had turned in a superb gallop.

“He ran his last furlong (200m) in a tick over 11 seconds,” he said this evening. “It was winning work. But I was worried about his inside draw because he is such a big horse who needs plenty of galloping room.

“I told Blake he couldn’t win unless he went around them, but as it turned out he did the right thing saving ground on the inside in the straight when the field fanned and On Angels Wings got ample room to stretch out.”

Mayfield-Smith has only eight horses in work, and regular winners have been hard to come by: “It’s frustrating of course, but you have to be realistic,” he said. “That’s the way it is, and you can only do the best you can with what you’ve got.”

Mayfield-Smith had three starters on his home track; the other pair Our Liberty ($61) and Ausbred Waawor ($41) both finished second last in their respective races.

On Angels Wings has started 26 times; 17 of them at Hawkesbury, where he has recorded his three career wins and as many seconds.

“There’s no reason for that; it’s just the way it has panned out,” Mayfield-Smith said. “But I’ve taken my time this preparation getting him up to today’s distance because he can over-race.

“I wanted to be sure I had him settled before we went to the 1800m. He was unlucky in the Soldier's Saddle (1400m) at Bathurst on ANZAC Day and again at his next start at Kembla Grange over 1500m.”

On Angels Wings began his career with another trainer before joining Mayfield-Smith’s stable: “He had to have a throat operation after I got him, and the problem was so bad the vets weren’t certain he would race again,” he said.

“Obviously, I’m happy that we’ve won another race with him, but I’m not certain where we go with him next. He is okay at 1600m and effective at 1800m (today’s distance), but doesn’t quite manage 2000m.

“The tight Canterbury circuit doesn’t really suit him, and his Benchmark rating is so low that it’s hard to get starts in town over suitable distances.”

On Angels Wings, one of the biggest horses in training, stands nearly 17 hands and weighs around 540kg.