The prospect of a wet track has enhanced the confidence of Wyong trainer Kristen Buchanan who has promising three-year-old Earl of Sandwich ($2.40 on TAB) heading to Newcastle on Thursday.

The gelding is the early favourite for the 1400m Minder Cloud Services Maiden Handicap in which Sam Clipperton has the mount.

Earl of Sandwich was originally trained by John O’Shea where he contested barrier trials but did not race. 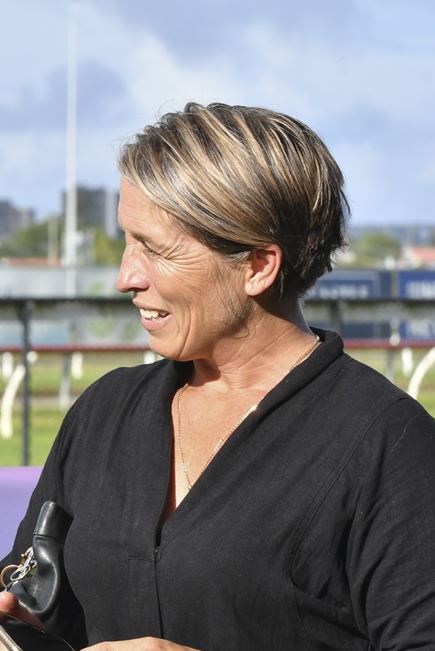 Under Kristen Buchanan’s [pictured left] care, the three-year-old has had four starts for two seconds.

In October he was narrowly beaten in a 1500m Newcastle maiden and recently on March 9, Earl of Sandwich resumed from a spell when runner-up to Spirituality in a strong Wyong maiden.

Buchanan was riding trackwork at Wyong when contacted on Wednesday: “Earl of Sandwich’s breeding suggests a wet track will not be a problem. He has trialled well on a heavy track and he raced okay on a soft track before a spell.

"I am backing him up reasonably quick but with so much rain forecast for the next week, Newcastle was the best option. He is tough, honest and sound and is improving all the time.

"Newcastle is so spacious with a long straight and he raced so well there in October. He has done a treat since the first-up run and Sam was keen to ride him,” Buchanan said.

Kris Lees, fresh from success with Mugatoo last Saturday, will saddle up five of his team at Newcastle and two of them are early favourites.

Exceed and Excel filly Excelness ($1.95 fav) kicks off the day for Lees in the opening event, the Coastline Pools And Spas Maiden Handicap, 900m.

The three-year-old was run down late when runner-up at Port Macquarie on debut on a heavy track on March 4. Dylan Gibbons returns to riding after a fall at Tamworth and he takes the mount on the filly.

Lees's colt Rustic Steel ($2.60 fav) is the early favourite in the 1200m Reward Hospitality Benchmark 64 Handicap. The three-year-old led all the way to win a Randwick maiden in November and he had no luck and pulled up with lacerations to a heel when beaten two lengths at Kembla on March 2.

James McDonald has three mounts at Newcastle and each is well fancied. He rides the New Zealand-bred and owned Waihaha Falls ($1.80) an odds-on early favourite in the Macka’s Sand And Soil Maiden Plate, 1200m. The gelding was impressive in a recent Hawkesbury trial.

‘J-Mac’ has the mount on the Hawkes family’s Snitzel colt Mr. Mozart ($3) in the Reward Hospitality Benchmark 64 Handicap 1200m. The two-year-old came from midfield to win on debut at Warwick Farm on March 3.

The champion jockey was aboard Newcastle three-year-old favourite Members Only ($4.80) when he won easily at Newcastle on March 5. He has the mount on the talented gelding in the final event on Thursday, the TAB Venue Mode Benchmark 64 Handicap 1400m.

Since entering Nathan Doyle’s stable Members Only had two starts both at Newcastle for a win and a second.