Promising debutante King Lenny has shown trainer Todd Smart enough to suggest he can overcome a wide draw at Kembla Grange on Saturday.

The unraced two-year-old has drawn the outside of a 12-horse field in the Wave FM 2YO Maiden Plate (1000m) but Smart is leaning towards giving King Lenny his chance from the wide alley.

King Lenny is also nominated for next Wednesday’s meeting on the Kensington Track at Randwick but Smart was keen to test his juvenile down the spacious Kembla straight. 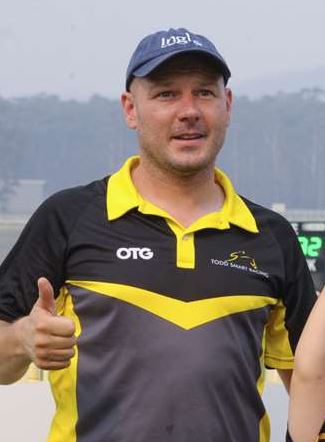 “It is not ideal drawing wide but he is a horse that I have a fair bit of an opinion of,” Smart said. “He trialled really well. He was a bit green and slow out but definitely took a lot out of the trial.

“He just keeps getting better and better and he showed that in his trial the other day. If he can improve off his trial, he is going to jump and find a spot and get home.

“He is probably looking for a bit more ground than 1000 but it’s a good start.”

King Lenny has had the one trial over 800m, where he ran on well to grab third at Goulburn on May 8.  Jockey Aaron Sweeney will ride the colt on Saturday and Smart will be keeping his instructions simply for the hoop.

“We will just try and have him where he is comfortable,” Smart said. “Obviously the straight at Kembla Grange is a big long one and I know it is only 1000 but he is a horse that you want him to be comfortable.

“He is going to be midfield or worse with the way he is but if we can just get him where he is comfortable, that’s the important thing.”

Despite still being a colt, the son of Choisir remains relatively easy to deal with in trackwork and Smart hopes he can bring it to raceday.

“He is not too bad as a colt,” Smart said. “Mentally he is still a bit behind but athletically and build wise he is doing everything right.

“At home he is doing everything right. He is not colty but he is a big horse that will benefit from this preparation. He is a really big horse but once he gets in his stride, he is a big athletic horse.”

The Snowdens accepted with three runners, Coat Of Arms, Concealed and Affiliate. The opening race at Kembla Grange jumps at 11.42am.