After Newcastle Win: "We’ll Have A Drink Out Of The Cup!"

What better way to share your first victory than winning a trophy race?

And it was almost a quinella result with their other representative, Munich ($10), finishing an excellent third at his first start for his new stable. 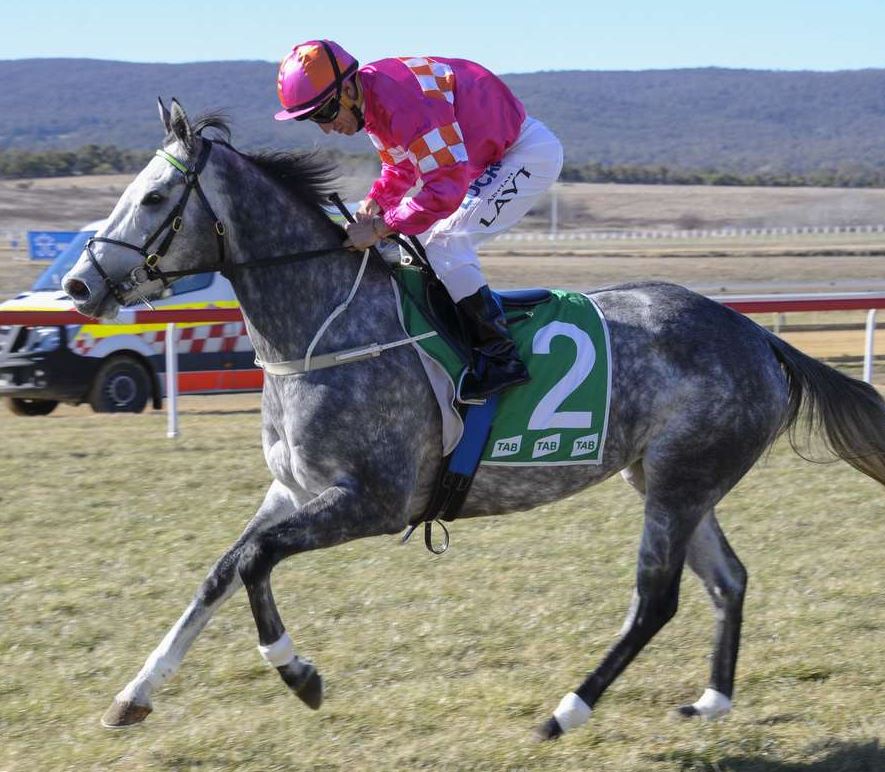 The husband and wife duo began their new training partnership at the beginning of the current season in August and had endured a frustrating run of eight minor placings, the latest being Ellebeedee at Muswellbrook last Friday.

“The wait has been worthwhile to win such a good race named after Australia’s winningest jockey Robert Thompson,” Jason Attard said as the couple headed home to their Grose Vale property.

“We’ll celebrate with a drink out of the Cup when we get home.”

The Attards collected both the owner and trainers’ trophies and they will be on display at their Owners’ Day on December 15.

But they will be quite content to hand over the Cup to Walcha owner Kate Nivison (Etak Thoroughbreds) – who wasn’t able to be trackside today – at that get-together.

“Kate owns Cinderconi and I race the mare on lease with her,” Lucy Attard explained. “She was raced on lease before and her previous owners decided to end their association after she bled in a race at Goulburn in April when she ran third.

“Kate was happy to keep Cinderconi with us, and we really appreciate her support. She now has four horses with us.”

Expatriate South African jockey Keagan Latham turned in a dashing display to win the Robert Thompson Cup on Cinderconi, who had been placed at Nowra and Muswellbrook at her previous starts. He gave the mare a perfect run on the fence, then began to ease a few horses away from the inside on straightening.

When held up for a clear run, Latham spotted a gap near the inside, quickly switched back – and the mare sprinted through to win convincingly. Her success completed a double in feature races for Latham, who also won the Gary Harley Cup on $21 chance Knight Star.

Whilst the Attards are hopeful Cinderconi – who has won three races and been placed six times from only 15 starts – will measure up to midweek company in the city, they are also excited about third placegetter Munich’s future.

The lightly-raced Snitzel four-year-old, twice a Sydney placegetter and a Doomben winner in February this year, was having only his eighth start.

“We tried something different with him today by riding him off the pace,” Jason Attard said. “He is a nice horse and will take a lot of improvement from this run.”

Hawkesbury-based Cummings, who decided to take out his own licence in March after sharing a training partnership with his father Anthony at Royal Randwick, landed his first winner this season when debutante Sunborn ($2.80 favourite) gamely won the 2YO Maiden Plate (900m).

Edward Cummings called on the experience of senior jockey Glyn Schofield to get his first full season of training off to a successful start.

Schofield partnered Sunborn when fourth in a 900m Randwick trial last Tuesday, and it proved an advantage as the expatriate South African got the best out of her in the closing stages to edge out his ex-countryman Keagan Latham on Tudor Magic ($4.80), who had made a bold bid for victory.

Cummings went to $58,000 to secure the daughter of Casino Prince at the Inglis Classic yearling sale at the beginning of the year.

Interestingly, her dam Honeymoon Cruise (by Fastnet Rock) was prepared by his father Anthony, and had only three starts (two in Victoria and the other at Hawkesbury) in 2012-13 before being retired.

Sunborn was Cummings’s 23rd runner for his second winner, along with four minor placings. He notched his first win at Wellington on July 9 with Gin Runner (also in a 2YO Maiden Plate, 1100m), who was his 10th starter at that time.

Understandably pleased with Sunborn’s victory, Cummings believes she has a nice future.

“She was quite green and is still immature but got the job done, so it was a good result for the owners and all concerned at the stable,” he said. “I’m confident she will take great improvement from that run, and will definitely appreciate further.”

Fifth-generation trainer Cummings calls his business Myrtle House in honour of his late great grandfather Jim, who rode Myrtle to victory in the 1910 Alice Springs Cup.