Bullock In Top Form And The Nation's Leading Rider

Aaron Bullock, high flying with a clear lead in the Australian Jockeys' Premiership, has an attractive book of rides at Saturday’s Newcastle race meeting.

The Singleton boy has ridden 49 winners in two months and four days into the current season.

Jade McNaught is in second place with 34 winners and Australian record holder William Pike is in third place with 32 winners. 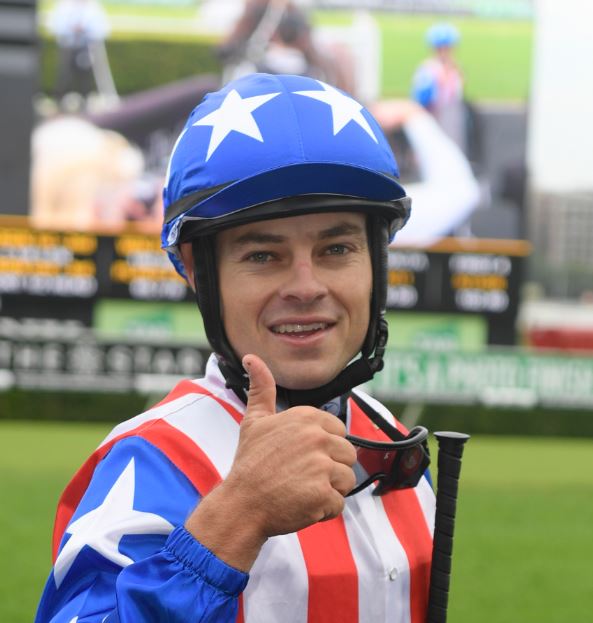 Aaron Bullock - is the leading jockey in Australia. Image by Bradley Photographers

Bullock will be aboard Syncline and Elgin for Kris Lees, Nothing Too Hard and Pandano for Paul Perry, and his other two mounts are Oakfield Twilight (Damian Lane) and One Moreforluck (Grant Allard).

Syncline will contest the 1200m Maiden Plate after a narrow defeat on debut at Newcastle on the recent Cup Day.

The colt was a street corner tip that day and he was only beaten a head. Bullock has a wrap on Syncline.

“He is a smart colt and I couldn’t believe he was beaten first-up. Syncline is a gross colt and he is much fitter this time. I will ride him off the speed,” Bullock said.

Elgin runs in a very strong 1400m Maiden Handicap. Since arriving at the Lees stable from Lloyd Williams, Elgin has failed to break through, but he has never been far away.

“I believe Elgin has a great chance. He got held up last start and I thought his run was full of merit,” Bullock said.

The Perry pair of Nothing Too Hard and Pandano both have strong claims in their respective races.

Nothing Too Hard steps up to 1870m in the Benchmark 64 Handicap after a struggling fourth first-up at Muswellbrook three weeks ago.

Pandano has been runner-up in his last two starts on this track and he has drawn ideally in the 1200m Benchmark 64 Handicap.

“They walked in Nothing Too Hard’s race at Muswellbrook and the stable wanted him to go back. He went okay and this race is more suitable.

"I like Pandano on Saturday and he is in good form. He was outside the leader chasing last start and we might ride him a bit quieter,” Bullock said.

He was four lengths away from Rock in the recent Cameron Handicap and this is a huge drop in class.

He led until well in the straight in the Cameron and he was only beaten a length by Archedemus in the Provincial Championships Qualifier on this track in March.

Maitland three-year-old From The Hip can atone for an unlucky last start defeat when he contests the 900m 3YO Maiden Handicap.

He was very slowly away and that cost him as he was only beaten 1¼ lengths. Phillip Atkins trains From The Hip for Newcastle businessman Lee Rowan and Louise Day retains the mount.

Newcastle apprentice Samantha Clenton returns to riding at Newcastle on Saturday after being off the scene with a fracture in her foot. She only has two mounts and another four at Muswellbrook on Monday.