Partnership Hopes To Keep Cup In The Family (Kembla)

The Kevin Robinson Memorial Cup is always high on the agenda for the Robert & Luke Price stable and they’ll launch a two-pronged attacked in Saturday’s edition of the race at Kembla Grange.

The race is one of several feature Cups on Noahs Ark Berry Cup day and holds a special place in the Prices' hearts.

Kevin Robinson was the father of Shoalhaven trainer Terry and was also Robert Price’s father-in-law and Luke Price's grandfather. 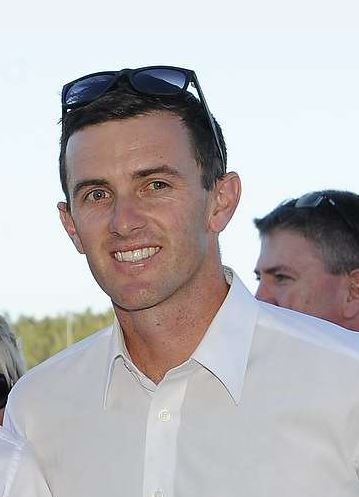 Co-trainer Luke Price - expecting to have a successful day at Kembla Grange. Image by Bradley Photographers

Terry has Our Rosemaree in the Cup, a Benchmark 64 Handicap over 1300m, while co-trainers Robert and Luke have Leami Astray and Accoy in the race.

“It’s good to have a have team in,” Luke Price said. “Accoy was good first-up and we are going to have the speed in the race with Leami Astray. He will go close as well.

“Hopefully we can fight it out with Uncle Terry, who has Our Rosemaree as well. I know we had to fight over which one Winona (Costin) was riding all week.”

Costin has been booked to ride Accoy second-up from a spell.

The daughter of Unencumbered ran fifth at Hawkesbury on September 12 and Price believes she will be suited by a return to her home track: “She is going really good,” Price said.

“Her first-up run was outstanding on an unsuitable track at Hawkesbury. She attacked the line really good and trained on really well.

“She has drawn a lovely barrier and I expect her to be fighting out the finish.”

Leami Astray was weighted with 62.5kg but the claim of apprentice Billie Owen brings the classy seven-year-old right into the equation, according to Luke Price.

“She is tough to place but it is going to help with Billy’s claim,” he said. “He is only riding 58kg at the moment so we aren’t going to carry a heap of dead weight.

"She looks like the leader on paper. She will take up and will take a power of getting past.”

The Price's will be chasing a Cups double when Shapur contests the Noahs Ark Berry Cup Conditional Benchmark 70 Handicap (1600m).

“He is back in winning form after a mixed prep,” Price said.

“We got him back in the winner’s circle at Moruya the other day which wasn’t a bad race. He beat the others by a good margin.

The Prices also have Ilvermorny in the Hardie Family Class 1 & Maiden Plate which Price expects will run well.

The Jim McGee Memorial Cup Maiden Handicap (1400m) will also be staged, with the opening race at 12.49pm.