Gear Change Could Prove The Difference At Hawkesbury

Brad Widdup is banking on a gear change aiding a promising two-year-old filly to “fly” at Hawkesbury on Tuesday.

Hawkesbury’s leading trainer, keen to add to his tally of 37 winners so far this season, has opted for blinkers on Night Flyer ($2.50 favourite on TAB fixed odds) in the Blakes Marine Provincial & Country Maiden Handicap (1100m).

Widdup’s brother-in-law Christian Reith will ride the All Too Hard filly, who is the pre-post favorite on the strength of two excellent performances at her only runs to date. 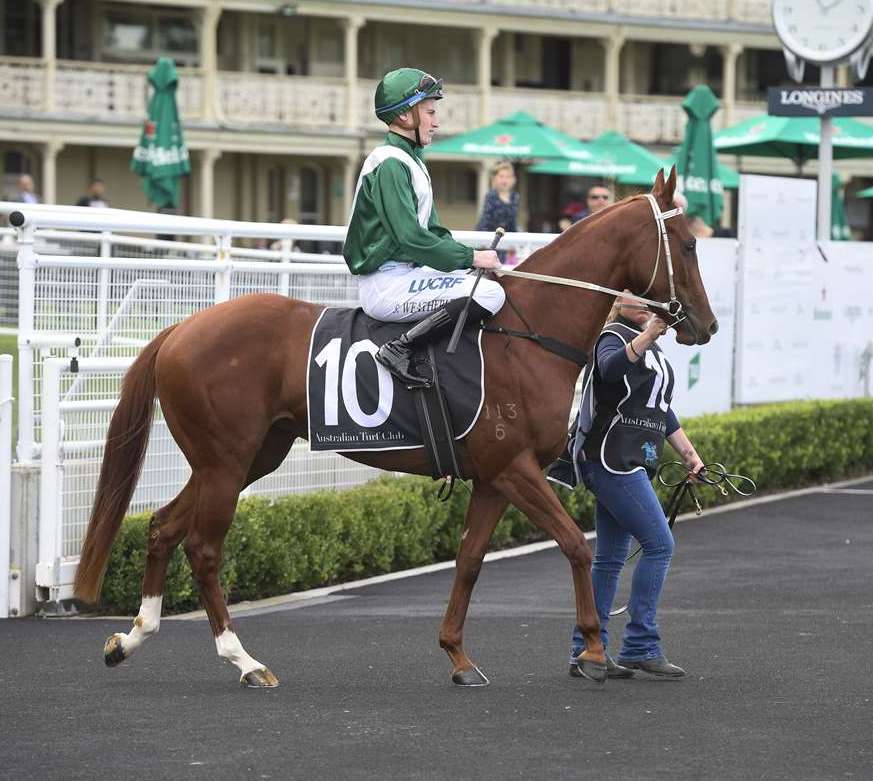 Night Flyer (Sam Weatherley) steps out for a race at Royal Randwick. Image by Bradley Photographers

Night Flyer on debut chased home stablemate Switched (subsequently placed at both Sydney starts, the latest behind boom filly Funstar at Royal Randwick last Saturday) in a Kembla Grange 2YO Maiden (1000m) on May 21, and then finished fourth to Leviathan (narrowly beaten by Funstar at Randwick) in a similar race over 1100m on the Kensington Track on June 10.

“She has worn them in work since the Kensington race, and this does look a suitable opportunity for her to break through even though she is taking on older horses.”

Widdup will rely on Night Flyer as he has decided to bypass the event with his other acceptor Islands because of an awkward draw and wait for a Kembla Grange assignment on Thursday.

Widdup’s other Hawkesbury representative Run For Glory (Reith, $81) begins his career in the Hawkesbury Gazette 2YO Maiden Handicap (1300m) and will race in winkers.

The Olympic Glory youngster hasn’t figured in two recent Rosehill Gardens trials, but Widdup is anticipating a better performance making his debut, although uncertain how he will cope with the rain-affected track.

“I wouldn’t be judging him on those trials because he has been a lot sharper in his gallops since his latest trial on June 7,” he said. “He is a big horse who is still learning and no doubt will take further improvement from this race.”

Widdup was understandably disappointed not to score first-up with Darling Point, who turned in an outstanding performance to come from last and just fail to edge out Betcha Flying at Canterbury last Wednesday.

He has decided to spell the Lonhro filly, and give her every chance to measure up to the better class three-year-old fillies races in spring, once she has ticked off a maiden success.

Fellow Hawkesbury co-trainers Mitch and Desiree Kearney will oppose Widdup’s Night Flyer in the Provincial & Country Maiden tomorrow with lightly-raced two-year-old Heza Gentleman ($14) – and a victory would be pretty special for the couple.

Heza Gentleman (by Nicconi) is the first foal of Hard Spun mare Silk Spun, who gave Mitch Kearney his first win when he started out training initially on his own, at Hawkesbury on July 20, 2014.

“Silk Spun was the only horse I had in work at the time,” Kearney recalled this morning. “I had been training for only 18 months, and she was my eighth starter. She was placed at Newcastle earlier that year at $101.”

Heza Gentleman was having only his second start when an excellent second to Lucky Siren in a Goulburn Maiden Plate (1000m) on June 14 against older horses.

“He has done super since that race,” Kearney added. “It would be a terrific thrill to win with Silk Spun’s first foal, especially on our home track.”

The Kearneys also will start another of Hard Spun’s progeny, Quick Spin ($14), in the Polytrack Benchmark 64 Handicap (1300m).

A recent addition to the stable, Quick Spin is coming off a last-start win at that same Goulburn meeting, in a Benchmark 58 Handicap (1200m).

Lee Magorrian rode the Kearney pair at Goulburn, and retains both mounts tomorrow.

“The soft track tomorrow suits our horses,” Kearney said. “It was soft when they raced at Goulburn.”

Hawkesbury punters will be pinning their faith – and money – in Godolphin’s James Cummings having a big day.

Cummings has three early favorites and a second favourite in four of the seven races.

Glyn Schofield rides Canzonet and Secretively, and Tommy Berry has the Waka and Mid Air mounts.

Canzonet, a three-year-old by Exceed and Excel, has been gelded since finishing second at Gosford in February at only his second start. He won an 800m Kembla Grange trial on June 12 and will race in blinkers tomorrow.