X-Factor On Clark's Side For Master's Queen Elizabeth Showdown

The thing about an X-factor horse is you don’t know where the ceiling is and that’s how jockey Tim Clark sees Master Of Wine ahead of the exciting galloper’s biggest test at Randwick on Saturday. 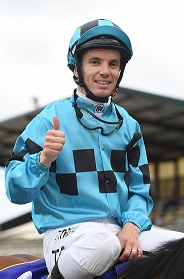 Last time Clark partnered Master Of Wine was to successive Randwick wins back in October and at the time he was being touted as a potential last minute Cups horse.

If he continues his sharp rise to the top by making it five straight wins and knocking off a crack field in the Group 1 $2m Longines Queen Elizabeth Stakes (2000m) he could lay claim to being our next weight-for-age star.

“There were good vibes about him back in the spring, not (aiming at the Cup) may have been the makings of him,’’ Clark said.

“He’s obviously got really good ability, what he did going 1400m to 2000m last start on a bog track and to win the way he did was extremely impressive.

“This is the real test for him and he’s come up with a bad draw so it makes it that little bit harder again.

“If he can perform well you’d think over the next 12 to 18 months he’s going to be one of the headline horses in these weight-for-age races. I’m sure the Hawkes team and the connections are very excited for the future with him.”

At his Group 1 debut, Master Of Wine is faced with 10 individual Group 1 winners so it’s a real baptism of fire at the top level and, as Clark alluded, he has the outside barrier to deal with.

The five-year-old hasn’t raced for a month since his easy win in the Group 3 Sky High Stakes (2000m), with the suspended Tommy Berry on board, where he accounted for Mustajeer who then chased home Verry Elleegant at weight-for-age, but he warmed up with an easy gallop in a trial on Monday.

Clark isn’t sure how he’ll play it from that tricky alley but he says there’s no reason to go there with a negative mindset.

“He has been jumping and putting himself in the race which is good to see this time so it’ll be interesting to see how it plays out early on,’’ he said.

“All the other main chances have drawn low so they have a bit of an advantage on him there.’’

Master Of Wine is on the fifth line of betting with TAB at $9 in the Queen Elizabeth.

Clark partners Group 1 winner Con Te Partiro in the $500,000 Coolmore Legacy (1600m) and warned she shouldn’t be underestimated as she was last time she raced in mares company.

That was in the Coolmore Classic and she scored a gritty on pace win before finishing sixth behind Nettoyer in the Doncaster Mile last weekend yet is only rated a $16 shot on Saturday.

Master Of Wine wins at Rosehill on March 14

“She’s going great, she enjoys the sting out of the track and I’m sure she is going to run well again.

“It was always the plan to go three weeks to the Doncaster then back up. She’d only have to replicate what she’s done in the last couple to be fighting out the finish.’’

Three weeks ago Clark partnered I Am Excited to her maiden Group 1 win in The Galaxy and the pair face a very different challenge in the Group 2 $300,000 TAB Sapphire Stakes (1200m).

The mare ran the day’s fastest last 600m of 33.13 (Punter’s Intelligence) to win at Rosehill and generally has a backmarker style of racing.

Still, he said he’s going to need some good fortune to overcome a 7kg rise on The Galaxy win plus jumping from the outside alley in a 16 horse field but her Group 1 win is being respected as she’s a $9.50 chance with TAB.

“She had a low draw and a light weight and now she has a high draw and a big weight, that’s probably not a great mix,’’ he said.

“She’s very capable on her day, it’s a matter of what sort of run she is going to get early. It’s not going to be easy for her from out there with that weight.”