Is An Everest Run A Wild Idea For Smart Colt?

It depends who you ask. Obviously the syndicate involved with Chris Waller's slot - the last remaining unfilled spot in the $15m TAB Everest - has the final say. 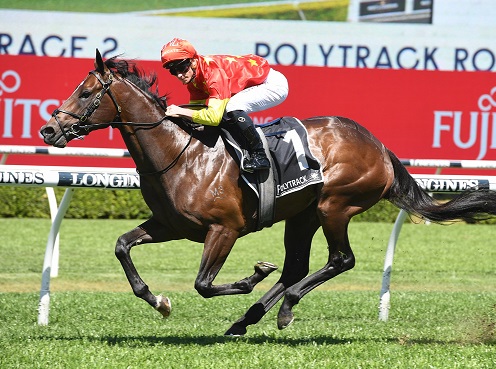 Co-trainer Paul Snowden left the door ajar, as did Newgate's Henry Field who is in the ownership of the colt, but jockey James McDonald poured some cold water on the idea.

“I think he has another level in him and I think he’ll be even better in the autumn,'' McDonald said.

"He probably doesn’t have the ring power for an Everest yet, but against his own age over six furlongs it's good to see that he ticked that box today."

Wild Ruler stopped the clock at 1:09.07 and ran a last 600m of 33.43 (Punter's Intelligence) without appearing to be unduly pushed by McDonald. He moved to $21 in the TAB Everest market after the Roman Consul win.

He was one of four horses said to be in consideration for the final slot, Doubtland's defeat in the Roman Consul surely counts him out while Dirty Work won narrowly in Melbourne. The Waller-trained Haut Brion Her is the other option floated.

Snowden concurred with McDonald's view that the colt will shine in the new year. On the plus side Wild Ruler didn't appear to have a hard run, which would help him with the seven day back-up, and as a three-year-old will carry a light weight.

"It’s just not there yet, we are seeing patches of it. My guys will speak to their guys (about the Everest) I suppose and we’ll sort it out from there.

"This is what it was about today. Obviously a Group 2 is nothing to sneeze at on his resume. We can then look at our options.”

"One down" was Jason Collett's immediate reaction to winning his first Sydney Group 1, on gun filly Montefilia in the $1m Moet & Chandon Spring Champion Stakes (2000m), at Randwick.

The reference is to what lies ahead on TAB Everest week as he rides second favourite Gytrash in the $15m main event and ruling favourite It's Me in the $1.3m The Kosciuszko next Saturday.

It was a perfect ride from Collett on Montefilia, the third filly to win the Spring Champion in the past five editions, and the in-form jockey said once he rode her in work on Thursday he knew he was on a quality horse.

“She’s a star, credit to David Payne and his team to get her here in top shape, I galloped her Thursday morning and I left there pretty excited,” he said.

"She came back to me in the race and into a rhythm. I always thought she would be strong late. It was a matter of not getting there too soon."

It was a red letter day for Collett who opened the day with a Highway win on Amy's Shadow and followed his Spring Champion win with a last stride victory on Emeralds in the Group 3 $160,000 Bentley Angst Stakes (1600m).

Payne won the Spring Champion in 2017 with Ace High and he said he'll give it some thought before committing to a trip to Melbourne for the Oaks.

Montefilia became the first Flight Stakes winner to complete the three-year-old double and he said he's wary of not overtaxing her now because he's adamant in 2021 she'll be even better.

“If you look at her she is quite a lean filly. It’s exciting,” Payne said.

“She got a little bit held up there but it all worked out well. If you see her getting off the float you’d think she was flat as a pancake. She just stood there with her head down. She is a trainer’s dream.”

Behemoth Settles In Ahead Of Everest Tilt

It didn’t have the fanfare of his fellow South Australian's journey to Sydney but Behemoth arrived safely at Brad Widdup’s Hawkesbury stable around lunch time on Saturday for his TAB Everest mission.

His trainer David Jolly joined him late afternoon having flown in from Adelaide and said the trip was uneventful for the dual Group 1 winner.

Jolly said he will let the gelding settle into his new surrounds overnight before determining how his Everest week looks.

“His coat is still coming through, they’ve sent me photos along and the way and when he arrived and he looks really good,’’ Jolly said.

“He doesn’t need to do much, he’s a fit horse, he’ll probably do a maintenance gallop on Tuesday or Wednesday. We’ll have a look at him and see how he’s copped the trip and decide what we do.”

Since Behemoth’s Group 1 Sir Rupert Clarke Stakes win there’s been a shift in the Everest picture. Nature Strip’s stranglehold has loosened, there’s a new favourite in Classique Legend and the race appears up for grabs.

“A few of them have underachieved and a few have been going all right, it’s changing week to week,’’ he said.

Behemoth, who runs in The Star's slot with Nash Rawiller to ride, is a $13 chance in TAB’s market ahead of Tuesday night’s barrier draw, his South Australian counterpart Gytrash is the second favourite at $5.

A mid preparation freshen up has done wonders for Standout and co-trainer Gerald Ryan confirmed the talented four-year-old will take his place in the Group 3 $500,000 Sydney Stakes (1200m) on Everest Day.

Standout had a couple of cracks at the TAB Everest lead ups, running fifth in both The Shorts and the Premiere Stakes, so comes back a notch in class in the ‘consolation’ sprint.

Ryan said Standout spent a few days out just being a horse following the Premiere and when he returned to the stable showed the benefit of it.

“I thought what are we going to do with him for the first half of the week so we put him out on the grass during the day, box in the night, and he came back really well,’’ Ryan said.

Stan Fox Stakes winner Peltzer will be given his chance in the $1m Bondi Stakes (1600m) in two weeks after an all the way win in the Group 2 feature.

Ryan said there’s no reason why Peltzer won’t run out a strong mile, despite the placegetters closing on him late, as he’s really responded to a tougher routine since his run in the Golden Rose.

“I’ve worked him harder coming into this race than I had the other races,’’ he said.

“We’ll give him a go at 1600m, his pedigree says he’ll run it. Colada won the Stan Fox last year then ran third in the Bondi…this horse is a better horse than Colada.”

Richard Freedman, co-trainer of Stan Fox runner-up Prime Star, was rapt with his horse's effort and said he'll be back in two weeks to take Peltzer on again in the Bondi Stakes.

All Eyes On Kosciuszko Draw For Howlett

The barrier draw is trainer Todd Howlett’s greatest concern with Two Big Fari heading into the $1.3m Kosciuszko – he doesn’t want an inside gate.

It’s not often you hear a trainer say they’d prefer to draw wide in a big race but Howlett is adamant his horse’s best chance is if he’s allowed the space to find his feet, not bustled up early.

“It’s a strong race and it’s his toughest test but I’m sure he will be competitive.”

Two Big Fari hasn’t raced since he won at the Grafton carnival in July but Howlett has given him two recent trials. The first had mixed reviews at best but the second he raved about.

“The first one did worry me a bit, I think Grant (Buckley) was giving him an easy trial and I probably wanted him to do a bit more but the next trial he was back to himself,’’ he said.

“Since the last trial he’s really come on, he’ll do fast work next Tuesday.”

Buckley will ride Two Big Fari in The Kosciuszko, he’s a $13 chance with TAB and Howlett said while it is his biggest test he feels he’s up to the task.

With the 14 horse field determined, after Irish Songs claimed the final slot on Friday, the process of working out emergencies begins. Trainers Brett Thompson and Danny Williams are both keen for their respective horses Kookabaa and Prairie Fire to be considered.