What You Missed - Randwick May 25

No Excuses For Reloaded
Jason Collett couldn't offer any excuses for beaten favourite Reloaded in the opener at Royal Randwick with the boom colt no match for Prince Fawaz.

"He settled great, got out but probably didn't see the winner coming. He fought off O'Shea's horse (Sea Of Life) and did that quite easily, but that other horse came over the top," Collett said.

Perhaps we just underestimated exactly how good the winner was. Not Adam Hyeronimus though.

"He is a serious horse and shown that from day dot," Hyeronimus said.

After Reloaded shifted out in the run causing a domino effect to his outside, Prince Fawaz speared out abruptly making the win even more meritorious. Punters Intelligence reveals his last 600m of 33.62s, was some 4.5 lengths quicker than Reloaded.

"It was a very good win for that to happen to him at the top of the straight, pick himself up within four strides and be back in rhythm, and in another 100 metres he had the race won," said Hyeronimus.

"Not much gets me excited but I galloped him about six weeks ago and had a grin from ear to ear."

Will Reloaded justify the hype?

Punters think so with the 2YO at $1.70 with @tabcomau. He looks the part in the yard. pic.twitter.com/Rh6POwPI0y

Wolfe Howls Through The Grades
He had the race run to suit but it won't be the last time we see Wolfe in the winners' stall. 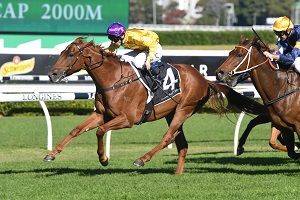 Wolfe made it two on the trot (Pic: Steve Hart)

The four-year-old was backed as if unbeatable, starting $1.55 with TAB Fixed Odds, and after stacking his rivals up, despite a few nervous moments in the straight, the result was never really in doubt.

"They have got to keep progressing and every start gets harder, he progressed to Saturday grade today and although there were a couple of moments up the straight were he looked in trouble he kept responding," said Tim Clark.

"He could have gone another two laps and they wouldn't have got past him. He just wants a challenge and when they come to him he responds."

To be fair to his rivals, Wolfe was entitled to win like he did given the slow early sectionals he ran from the front. Punters Intelligence further reveals a 34.14s last 600m. When you're finishing like that over 2000m nothing else in the race is much hope.

The Need For Speed
What went wrong for Zonk, Goddodin and the brave Ready To Prophet?

They went too quickly. Punters Intelligence reveals that Zonk led through the first 600m in a slick 34.16s. That allowed the winner Charlayne to pounce late clocking a fast 1200m overall time of 1:08.17, smashing Clipper's class record by five lengths.

Ready To Prophet paddled home her last 200m (12.11s) but wasn't entitled to finish second given the work she did in the run. Having won a Listed race at Scone first up, she has obviously returned in outstanding order. Keep following her.

"Very tough, she is a lovely filly but just needed to be taken 50 metres further in the run," said her jockey Billy Owen.

On Goddodin, Tim Clark said, "She had a wide run but was a beaten horse a long way from home, maybe it was being second up off a long spell."

Zonk's jockey Chris Williams said the mare went to pieces in the heat and that didn't see her run up to her best.

King Reigns On Deprive
With Rachel King zigging and zagging in behind the field on the heavily backed Deprive, punters were left to watch through their fingers but once the Godolphin galloper found clear air he rocketed to the line.

"I haven't ridden one like that for a while," gushed King.

"They rolled along quick enough, luckily he got a few gaps and he was too strong. James wanted me to hold on to him for as long as possible until I got to the top of the rise, just help him along, he was first up and still learning what to do," continued King.

"I had a look out and he was going to have to come out seven or eight horses to get around them but spotted a gap. It's easy to do that when you're on a good horse."

Meanwhile, Jason Collett believes Cradle Mountain's failure could be attributed to him not finding the front. The speedster is now zero from five when he hasn't led, and six from six when he has.

"We took a sit off the speed but wasn't able to quicken off it. May need to lead," Collett said.

Deprive still a touch fresh in the yard but so far is much better than last week when he was subsequently scratched at the barriers.