What You Missed - Randwick 26th January

"I did cross my mind in terms of it being his opportunity, I felt like he was airborne today. I never really thought he was going to turn it up at all," he replied.

"How devastating was he! The speed was strong and I got into a nice spot but I was mindful of the track playing a bit leaderish so I got going a bit earlier. He put the race to bed and attacked the line, it was just fantastic," said Shinn.

Charlie Duckworth, the racing manager for Chris Waller quipped, "I have received more text messages already from him winning today than when we win a Group One."

It’s been a while since we’ve seen this! Tom Melbourne back in the winners’ stall. He still knew exactly where to go 😉 @7horseracing @tabcomau pic.twitter.com/XbbsC8mk8W

Hartnell is likely to line up alongside stablemate Alizee joining Trapeze Artist, Le Romain and Lanciato. Chris Waller's three-year-olds Performer and Lean Mean Machine will be among the nominations but the latter is unlikely to run.

Hartnell looked very sharp running into third in his Rosehill trial on Thursday behind Master Ash and Kementari. Reports out of Godolphin suggest that the eight-year-old looks as good as ever and is bouncing around Agnes Banks with the enthusiasm of a four-year-old.

Blake Shinn was tasked with piloting Hartnell in his trial and said the three-time Group One "felt unbelievable."

Too Far For Sei Stella
Jay Ford was succinct in his rationale as to why Sei Stella failed to hold off Junglized.

"Everything went how I wanted. I didn't ride the race, I just rode her to get into a rhythm to give her every chance to get 1100m. It all unfolded really well for her but when the winner jumped on her inside the furlong she resisted early but once we got inside the 100m she was on empty.

For the record, Ford doesn't think it would have changed the result if Happy Mo didn't kick up to hold her out.

They were the words of a relieved Brenton Avdulla after Sylvia's Mother looked in all sorts of trouble half way down the straight, looking for a clear passage. 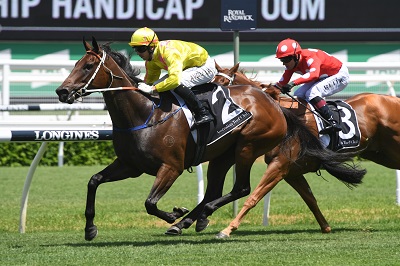 "To her credit when she switched across heels, I just kept her balanced and didn't really have to go for her, she picked them up in a stride," said the jockey.

Michael Hawkes said the stable would continue to work through the grades with the four-year-old, now a winner of four straight races.

"She has done a great job. She has got a lot of upside," Hawkes said, "Up the straight I didn't want to look, it was left and right, and I was just shaking my head."

Punters Intelligence highlighted this mare's devastating turn of foot from Canterbury and it was on display again at Randwick with a 11.35s last 200m split, despite any real momentum.