Farnan Does It Both Ends
Farnan. The two-year-old staring us all in the face leading into the Golden Slipper. 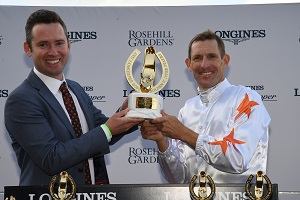 The win gave Hugh Bowman his first Golden Slipper, along with co-trainer Adrian Bott, while it was a remarkable seventh for Gai Waterhouse.

Farnan ran the fastest first 600m and the fastest last 600m. Not something you see to often and a mark of his dominance. Hugh Bowman rode a lovely controlled race through the middle sections before slipping home in 34.27s. His last 200m was 11.58s, incredibly, a length faster than the next best.

“He has come back a different horse this campaign, he has been quite special and he proved himself in the lead ups, he was very dominant, and he was dominant again today," quipped a buoyant Bowman.

Chris Waller hailed the brave run of fifth-placed Hungry Heart hinting that she's likely to head for a spell while Mamaragan's trainer John Thompson will push onto the Sires Produce Stakes (1400m) all being well.

"He has done super against more seasoned two-year-olds," said Thompson, "I'm rapped with our horses run, his second start in a race, in Nash's words 'we might have lost the battle but I reckon we'll win the war'. We've got a nice horse on our hands."

Mugatoo Goes Down In Manion
The picket fence is gone for Mugatoo.

It took a horse from Newmarket in the UK to end it. Young Rascal simply outstayed him.

Australian Bloodstock's Luke Murrell tweeted soon after that Mugatoo wouldn't be heading to the Sydney Cup, nor would stablemate Mustajeer.

Kris Lees said of Mugatoo, "He just went down to a strong European stayer, Kerrin (McEvoy) said he is just racing little aggressive. He is still a pretty in experienced horse so that'll come in time."

Young Rascal is now the $3 favourite for the Sydney Cup with TAB, after starting the day at $8. He is eligable for a penalty in the two mile feature which handicappers to decide on Monday if he'll carry any more than the 54kg he was originally allocated.

“I thought (Mugatoo) might sit for a touch and do us for a turn of foot. As soon as he loomed up, I knew watching Tom he was getting into him and he gets them rolling. He was going to be fit and hopefully run to the line," said Harry Eustace, assistant trainer to William Haggas.

Addeybb Sets Sights On Queen
What a race the G1 Queen Elizabeth now shapes to be after Addeybb, which gave Tom Marquand his first Group One, staked his claim by winning the G1 Ranvet Stakes (2000m). 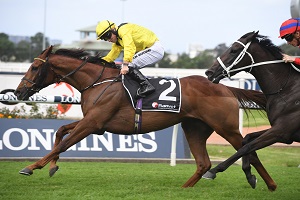 Addeybb's quote was trimmed from $4.50 into $4 for the race, which then came into $3.50 after Te Akau Shark ran third in the G1 George Ryder Stakes, while Verry Elleegant was slashed from $15 into $8 on the back of her game second.

Then add in Rosehill Guineas winner Castelvecchio ($11-$8), Master Of Wine and Japanese star Danon Premium, a fellow international that only recently arrived in Australia. Harry Eustace hasn't yet seen Danon Premium but you get the impression he isn't afraid of any rival after what Addeybb produced on drier ground than he prefers.

"Because we came at different times I haven't seen (Danon Premium) yet, he's still in quarantine and we're in isolation so we're very much apart," said Eustace.

"I've heard he is a lovely looking horse but we'll just be praying for rain come Queen Elizabeth day. That performance on that ground, that's right up there."

Shark Lacks Bite In Ryder
What do the sectionals say about Te Akau Shark?

Punters Intelligence shows that Dreamforce, as it looked to the eye, got control in front running moderate early splits for the first 900m before dashing home in 34.10s. There was no catching him.

Te Akau Shark did race a touch keenly in the early stages, and stewards questioned Opie Bosson's tactic to cover ground on the five-year-old, but Bosson put the run down to coming back in trip.

"The 1500m was probably just a little bit too sharp for him today," he said.

It was certainly a far cry from the sizzling splits he produced to win the G1 Chipping Norton Stakes last start but perhaps he is looking for 2000m now.

Winning trainer John Thompson said Dreamforce would likely head to the G1 All Aged Stakes next but the Doncaster is still an option.

He needs no introduction! 🦈

Check out the results and replays for Golden Slipper Day at Rosehill.