Bivouac To Scale Everest?
Having reveled in the Group One glory of the Golden Rose, it wasn't long before James Cummings was quizzed on Bivouac's Everest credentials.

“I’ve had jockeys willing to ride him at 53kgs telling me all week he can’t get beaten in (The Everest)," revealed Cummings.

"He's roared through the line and been too strong. There are plenty of options for us on the table. We are in a very commanding position with a horse like him and we’ve got a very important two weeks ahead to decide exactly what we do pay up for at 10am before The Everest.

"Races like the Coolmore are on the table. The Caulfield Guineas is worth consideration but he’s probably just too brilliant for that race so, yes, The Everest is an option.”

What if another slot holder came knocking though...

Bivouac from Yes Yes Yes and Exceedance... but how was the G1 Golden Rose won?

Punters Intelligence has the details. pic.twitter.com/ACOjZMDLDR

Enticing Star Fails To Shine
Whichever way you look at it, Enticing Star wasn't flash in the G2 Golden Pendant.

She ran fifth and was beaten 4.5 lengths off the winner Mizzy. Her spot in The TAB Everest has to be in doubt.

"She jumped a bit awkwardly," explained James McDonald, "And got back one spot further back than I anticipated but in saying that she failed to touch the bridle at any point in the race and finished like that."

"I think the blinkers would make a huge difference to her."

Enticing Star was set to run in the slot of Chris Waller Racing, so could Waller call on one of the most divisive sprinters of all time in Nature Strip? When quizzed after Nature Strip's G1 Moir victory as to what's next, Waller's answer was succinct. "The Everest," he replied.

It’s the first time we’ve seen her at the races in Sydney and the @tabcomau punters haven’t been shy in supporting her. pic.twitter.com/XBiFCWFQI3

No Epsom For Wolf
Mister Sea Wolf won't be running in next Saturday's $1m TAB Epsom Handicap despite winning the G2 Shannon Stakes.

“It’s unlikely," said Chris Waller, "You’ll see if you look at his form he needs to have his races spaced three to four weeks."

“He puts a bit into his races and he has a few secondary problems after a race where his legs puff up and things like that so you’re always dealing with something."

Waller still expects to be well represented in the mile feature, with $6 second favourite Kolding heading the team. Unforgotten, Mantastic, Le Juge and Star Of The Seas are other likely candidates.

No More Shadows For Super Hero
We knew Shadow Hero was good, but boy, even trainer Mark Newnham couldn't have predicted that. 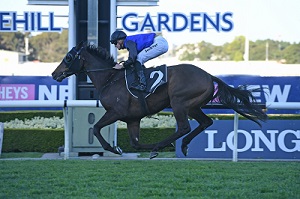 Shadow Hero was in a race of his own (Pic: Steve Hart)

The three-year-old towelled up his rivals in the Gloaming Stakes and will now head to the G1 Spring Champion Stakes in a fortnight.

“That’s what we hoped he was and that’s what I thought he was but I think today has confirmed it,” said Newnham.

“I think Josh (Parr) was a little worried when he rode him work on Tuesday, he was a bit too relaxed for him. I said ‘don’t worry, we haven’t put the blinkers on him yet’. He’s a bit like (his sire) Pierro in that sense, you put the blinkers on and he turns into a super hero.

“Hopefully we get to the Spring Champion Stakes in good order and then on to Melbourne.”

Check out the replays and results for Golden Rose Day.