It’s been a trying few months for Sam Weatherley. 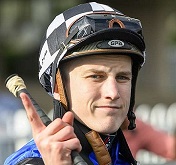 Sam Weatherley is keen to get back into the fight for the Sydney apprentice title. (Pic: Bradley Photos).

Earlier in the season he could do no wrong, he was riding city winners regularly and appeared to be in the box seat to be Sydney's champion apprentice.

As the autumn carnival closed in the rides dried up, he copped an untimely suspension or two and a challenger emerged in Robbie Dolan but the 19-year-old says he’s lost none of his desire to claim that title and is keen to start a surge at Randwick on Saturday.

“It’s very cut-throat and if you miss a week there, unless you’re one of the top riders, you can get forgotten a bit,’’ Weatherley said.

“Hopefully we’ve battled through the toughest times with the carnival over. I’m keen to get a bit of form going and seeing a few results on the board.’’

Go back to the end of 2018 and it was Weatherley who held that margin and he hasn’t forgotten that fact.

“It shows how quickly the racing game can turn around. It’s going to be a good battle, it’ll go right to the end,’’ he said.

“Robbie’s a very talented rider and he’s going to make it tough for me to peg the margin back but I’ll be trying with every single ride I get.’’

If there’s an ace up Weatherley’s sleeve it could be that he’s apprenticed to the country’s leading trainer Chris Waller, who supplies four of his rides at Randwick.

“His support could be what gets me through the winter and through the tough times so hopefully I have his backing and we can get some results,’’ he said.

Weatherley has earmarked Problem Solver, for Gerald Ryan, and Waller’s Calculated as his best winning chances on Saturday.

Problem Solver was trapped three and four wide when she resumed, as equal favourite, at Randwick two weeks ago and held on to be beaten 2.5 lengths.

She meets several of the same rivals in the Tab.com.au Handicap (1250m) where she’s $6.50 with the race’s sponsor.

"She looks to be a really nice chance after having a bit of a tough run last time,’’ he said.

“It was unfortunate from the wide barrier she was caught wide, hopefully we get a sweeter trip this time and see what she can do.

“There looks to be a fair bit of speed in the race so hopefully we can weave our way through and get the last crack at them.’’

A perfect draw and three runs back from a year off are major pluses for the talented but so far enigmatic Calculated in the Australian Turf Club Handicap (1550m) where he’s a $13 chance.

The gelding hasn’t won since he beat Brave Song in July 2017 and has placings behind Siege Of Quebec and Pierata to his name.

He finished a close third after leading to White Boots at Gosford three weeks ago.

“He’s got a lot of ability, more than most but he just needs a few things to go his way,’’ Weatherley said.

“One thing I like is the nice soft draw. I would have looked to lead but looking through it there’s a few with some pace in it but we’ll see what happens when we get out and go.

“It looks like we could get a nice run behind the speed and at his best he’s definitely capable of winning that race.’’