Champion trainer Chris Waller is banking on the addition of blinkers to complement Kubrick’s class and spark a return to form in the inaugural $1 million Bondi Stakes (1600m) at Randwick on Saturday. 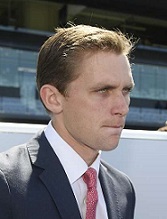 The Group 1 placed three-year-old has taken on the cream of his age group in three starts this spring without success but Waller’s assistant trainer Charlie Duckworth said the Bondi is a perfect target for a horse such as Kubrick.

“Hopefully he can bounce back into the winner’s circle, he certainly deserves to pick up a big cheque,’’ he said.

“He couldn’t be working any better than he is at the moment, obviously he is the highest rated in the race on Saturday so it looks like a nice opportunity to be racing for some phenomenal prizemoney.’’

Waller held the blinkers back from Kubrick heading into the Caulfield Guineas at his last start but he was never a factor after there.

A first-up fourth and second-up fifth behind Bivouac and Yes Yes Yes in September is form that reads very well for the Bondi if the blinkers can switch him back on.

“It’s a complete forget run from last start. It was an awkward draw, he was caught very wide and he never had any luck as a result,’’ Duckworth said.

“We worked him prior to that in blinkers and he worked well and we opted to keep them off, we were a little worried he might over race at the mile but we decided to put them on for this start.’’

Kubrick was $4.60 second favourite for the Bondi with TAB behind Just Thinkin’ who comes out of the Group 1 Spring Champion Stakes at his last start.

The second of the Waller runners in the $1m feature is the lightly raced Pancho who beat older horses at midweek level at Warwick Farm second-up so he faces a bit of a test but it's a target in his home town so that held plenty of appeal.

“He’s a very consistent horse, he’s tough and he’s honest and I guess we find out how good he is on Saturday,’’ Duckworth said.

“It’s amazing a horse like him can be racing for a $1m when he is so lightly raced and hasn’t been tried at a very high grade as yet.

“We couldn’t be happier with how he won last start, he knuckled down very well over the last 100m. He’s one that has improve through our system so I think he will be one to keep an eye out for.’’

The Group 3 $200,000 ICD Property Nivison (1200m) is a stakes race the Waller stable has yet to win in Sydney and he’ll saddle up Madam Rouge and Celebrity Dream in the mares event.

Duckworth said Madam Rouge is well placed with 54kg considering her rating compared to the other horses on the limit and impressed with her first-up fourth in the Silver Eagle.

“She’s improved from that run in terms of fitness and it looks like a nice opportunity for some black type,’’ he said.

“The draw isn’t perfect but a nice light weight should see her running home strongly.’’

Madam Rouge is second favourite at $4.60 with TAB while Celebrity Dream, owned by Bob Peters, is $17 after a first-up run at Flemington over 1400m where she was beaten four lengths.

“We decided to bring her back from Melbourne based on some of the tracks there being quite firm,’’ he said.

“She will get the run of the race from barrier five, she’s the second highest rated runner in the race and still gets in well at the weights.’’