Waller Backs Nature To Be Restored In Everest

Nature Strip the TAB Everest underdog – who would ever have thought it!

But as far as trainer Chris Waller is concerned the six-year-old is still the horse to beat in Saturday’s $15m TAB Everest (1200m) at Royal Randwick despite two defeats and a dramatic build up, with barrier mishaps and a respiratory issue, leading into his spring target.

It wasn’t that long ago Nature Strip was around a $2.60 chance with TAB and the Everest was looking a one horse race but he’s now $6 with question marks hanging over him.

So how does Waller handle the task of restoring the world’s highest rated sprinter to his best? In typical Waller fashion.

“What can you do? They are animals, they are unpredictable,’’ Waller said.

“We know that we have a very good horse so we don’t have to make him run faster. We just have to try to get him to the same place he’s been when he has been running his high ratings.

“We haven’t panicked. We’ve kept everything simple and made sure that he’s safe, in a good head space, and there’s no aches or pains. Based on that I’m going into Saturday’s race pretty confident he’ll run up to his best form.”

Waller said had he been aware Nature Strip had an issue prior to his unplaced run in the Group 2 Premiere Stakes (1200m) on October 3 the gelding would likely not have taken his place in that race.

He said the horse’s blood picture was taken on Monday and he has a clean bill of health.

“As I’ve said we can’t find anything wrong with him apart from the little bit of mucus he had after his last start but that was quickly cleared up.”

Nature Strip and Haut Brion Her, whose owners Three Bridges Thoroughbreds acquired the Waller Racing slot to run in the Everest, were put through their paces solo by race day jockeys James McDonald and Brenton Avdulla at Rosehill on Tuesday morning.

Waller didn’t reveal any times other than to say they both broke 24 seconds for their last 400m which he described as “about standard for a good sprinter”.

“The work from both horses were pretty good, just tidying up loose ends really,’’ he said.

“There’s no doubting their fitness, they are both very fit horses, I liked what I saw and they are exactly where they need to be.

“They still had plenty left over the concluding stages. Who knows how fast they could have run but we will see that on Saturday.”

Haut Brion Her was a Group 2 winner of the Sheraco Stakes (1200m) in September at her first run from an 11 month absence then finished seventh in the Golden Pendant (1400m) on September 26.

Waller is forgiving of that second-up defeat and said she could surprise plenty of people. The five-year-old is a $26 chance with TAB

“Outside her last start when she drew wide and things went against her she’s never been outside the first two,’’ he said.

“We are confident she can bounce back into the first two and hence her placing into this great race.”

Brenton Avdulla revealed he rode Haut Brion Her in some work after her Sheraco win and believes she is a Group 1 mare in waiting, and therefore a worthy Everest combatant. 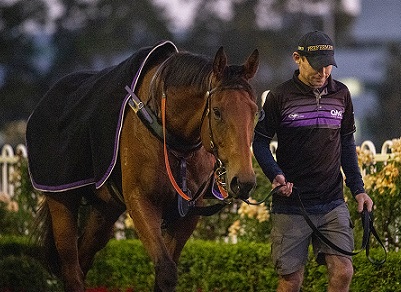 “For her to get a slot is exciting and I’m sure she won’t disgrace herself,’’ he said.

“She’s a Group 1 mare in the making, she profiles well, her six furlong record is super and she deserves her chance.

“The 1400m is a bit too much for her the other day, I know she has won at 1400m but she’s come back a bigger and stronger mare and faster. At the moment she is all speed.

“If she can be somewhere in the first four, doing no work, I’ve no doubt she is a first five contender.”

The last word goes to James McDonald when it comes to Nature Strip. His faith in the star sprinter is unwavering. In fact he’s playing it pretty cool.

He’s not concerned about the injection of speed through the late inclusion of Dollar For Dollar and the look of his coat tells McDonald he’s ready to peak.

“He can really perform on his day and if he turns up in that form he will be hard to beat,’’ McDonald said.

“He only has to bring one of those performances like he did in the Darley or TJ and he will be winning this sort of race. He is a brute on his day and I’m hoping he performs as well as everyone knows he can.”