If you ask trainer David Vandyke there’s a lot riding on the Sydney debut of star four-year-old Alligator Blood at Royal Randwick on Saturday. 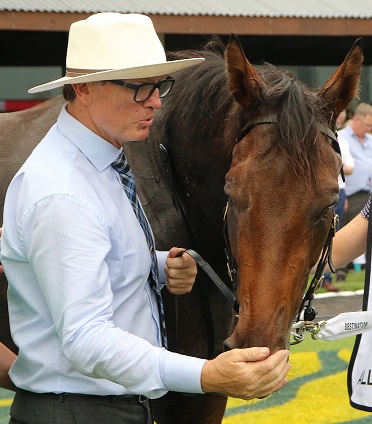 The cult galloper is favourite for the $7.5m Golden Eagle later this month and the vibe from Vandyke is a little conservative, hopeful more than confident you'd say, about what might happen in the $500,000 Silver Eagle (1300m).

On the other hand jockey Ryan Maloney has a sense of anticipation that Alligator Blood, on the back of an eye-catching return over an unsuitable trip, is right on track.

But Vandyke isn’t making any bold statements and wants to see a '1' against his name or at least flashing light placing to be confident heading into his spring grand final.

“He’s going along okay and we will find out on Saturday whether he has come back in good enough shape to compete at the top level this prep,’’ Vandyke said.

“I’m not convinced that he is back to his best but I am hoping he convinces me. It’s nice to see a smallish field and he should have every chance.”

It’s a curious statement from Vandyke that he needs proof that Alligator Blood is still the horse we saw be almost unstoppable as a three-year-old winning seven of his 10 starts including a Group 1 Australian Guineas.

The misses were of course the Magic Millions Guineas disqualification after winning the race, a last stride defeat in the Caulfield Guineas and his unplaced effort in the All Star Mile – and it’s that performance that sticks in Vandyke’s mind.

“The attrition rate is pretty high in regard to the horses he competed against last season,’’ he said.

“He had a long campaign which culminated in an average run in the All Star Mile.

“I don’t want to draw away from the facts, he really needs to step up and show that he is going to be able to compete at the top level.”

The gelding was the $2.25 TAB favourite on Wednesday to make a winning Sydney debut and he is a dominant $4.20 favourite in the Golden Eagle.

Four years ago at the corresponding meeting, Vandyke had one of his biggest days when Yankee Rose became the first filly to win the Spring Champion Stakes.

He said it’d be wonderful to win another feature race at Randwick and while Alligator Blood will be giving away weight to his eight rivals he’s confident it is achievable if he does produce his best.

Moloney was rapt with Alligator Blood’s first-up third behind The Odyssey where he carried 61kg at the shortest trip he’s tackled in his 13 starts.

“He’s come through that well. He gave the older horses 7kg and the 1100m was a bit sharp, especially around Doomben, but 1300m back against his own age looks ideal,’’ Maloney said.

“There’s a little bit there left in the tank, he hasn’t fully come through in the coat yet but I’m sure he’s ready to rock and roll.

“If he doesn’t run well you’re left scratching your head and you’d be wondering if you can go on to the Golden Eagle.”

Since that first-up run Alligator Blood has trialled at the Sunshine Coast and Moloney feels he has developed significantly into his four-year-old year.

In an ideal world he said he’d like to ride the horse with some cover but will jump knowing he’s not out of place under any scenario.

“Ideally we just camp off them with a sit and get one crack at them.

“I think what he showed last autumn said he can be a genuine weight-for-age contender. He strengthened up from his break so he needs to hold that form from last preparation.”