Experience has told trainer Peter Snowden not to over react when a young horse throws a race away in the manner Mandela did on debut earlier this month. 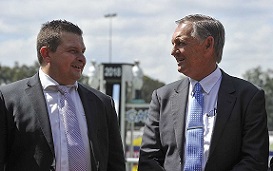 So, when the colt steps out seeking redemption in the Australian Turf Club Handicap (1400m) at Randwick on Saturday, Snowden is expecting the work done behind the scenes to pay off.

Mandela, $1.95 favourite with TAB on Thursday, looked certain to win at Canterbury on July 3 but just as he was about to put the eventual winner to the sword he veered left and the race was gone.

“There’s no doubt about it, it was the stick he resented,’’ Snowden said.

“He had winkers on, maybe it frightened him. He’s a very placid horse so it surprised me as it did everybody else that he did it.

“I’ve had horses in the past that have done it. Helmet did it for a while but they come out of it. When he trialled the other day we took the winkers off him and left him alone, gave him a flick out with the whip and a push the last furlong and he went straight as a die.

“You can never be sure, but I’m as confident as I can be that he will be fine. If you overreact you can cause another problem.’’

It’s an important race for Mandela on Saturday and one that the father and son training partnership will be watching closely to decide their next move.

He’s one of a host of Snowden stable nominations for the Group 1 Golden Rose (1400m) in September and there’s no doubt they hold him in a high regard.

“I think he is very much untapped. He’s a great specimen and he just has to learn his craft,’’ Snowden said.

“Everything about the horse tells me he is going to be a better horse as a late three-year-old, I’m not saying he’s not going to do well now.

“I’ll judge him hard on what he does on Saturday, whether he is ready to go to the better races or whether we need to put him out and give him that time in the paddock to let him fully mature.

“I’m a big believer in when horses are ready to go you keep them running. There’s no substitute for education, as you saw the other day it can beat you if you don’t do things right.’’

Mandela jumps from the inside alley, as he did at Canterbury, and Snowden has kept the winkers off him since the trial win last Friday.

He said he 1050m trial brought the colt on even more and is looking forward to seeing what he can produce at 1400m.

Meanwhile, Snowden confirmed dual Everest champion Redzel will have the first of two barrier trials prior to a resumption at Gosford on August 5.

Redzel, who again races in the Yulong Investments Everest slot in 2019, will trial again two weeks later before attempting a third straight win in the Group 3 Concorde Stakes (1000m) on September 7.

That race is shaping as a significant early Everest pointer with star soon to be four-year-old Sunlight pencilled in for the race and unbeaten Queenslander Zoustyle a likely runner.

Peter Snowden’s comments on the stable’s other Randwick runners:

Misteed (Race 3, $17): “She just missed the boat the other day, she had an opportunity to get out wide but ducked back inside which she doesn’t really like. I know she won at Canterbury that way but it’s not the best way to ride her. It’s a good field and it is going to have genuine pace which will suit her, she’s a good ambush filly so whether she is good enough time will tell but the race sets up well for her.’’

Island Missile (Race 6, $16): “The horse is going extra well at home and on bad tracks is still running well. He’s clearly a better horse on top of the ground. We haven’t had a good look to see whether we punch forward yet or go back and ride for luck but the horse is going better than his form suggests.’’

Smartedge (Race 7, $6.50): “He’s up in the weights but he’s going well. The freshen up and coming back from Brisbane has done him the world of good. He has the tail up now he’s had a win and he’s not out of that race.’’

Zavance (Race 8, $4.40): “Her run at the Sunshine Coast was outstanding and her runs prior that were good solid runs. She’s in good order to run well and it looks a nice race for her.’’

Natalia (Race 9, $3.70): “She had every chance the other day but found one better. She was only second-up so third-up should see her at her best and she has a good draw.’’