When the price tag says $2.8 million it’s hard not to focus on that but co-trainer Peter Snowden says how much Mount Fuji cost made no difference to how the colt has been prepared for his debut at Randwick on Saturday.

Snowden said the son of Snitzel has been set a bit of a task off one jump out and one barrier trial going into the $2m Inglis Millennium in 14 Days Handicap (1000m) but is adamant, regardless of the outlay, there’s talent under the bonnet. 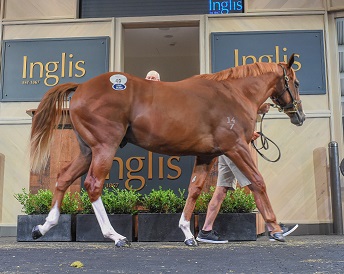 Mount Fuji goes through the sale ring last year at Inglis for $2.8m.

“I don't look at their price I just look at the horse and how he's been in the yard since I've had him,’’ Snowden said.

“He's a lovely horse, he'd want to be. But if you worry about (the price) it clouds your judgment, you just train the horse and pick when he's ready and try them.

“The good ones can do it, if he gets beaten I'm not saying he's not any good but he still needs a bit more time to learn his craft. He's still very new, but he has shown some really good things in his work.’’

Mount Fuji, whose dam Ichihara is a full sister to the mother of Menari which probably explains why James Harron had to go to $2.8m, has taken a little bit of time to develop and Snowden said the difference between the colt now and when he was in the stable a few months ago is significant.

He was bought only nine months ago, the top lot at the Sydney Easter Yearling Sale, so he’s been given plenty of time by the Snowdens to settle in but isn’t as accomplished as his stablemate Rulership, a Magic Millions buy, who has had a few preparations and three trials.

In his trial, Mount Fuji showed Snowden evidence that he is developing quickly by settling back and running home to be narrowly beaten by another stablemate in Barbaric back on January 13.

“I thought he trialled quite well. He only had one jump out before that first trial,’’ he said.

“He's a fast horse but tended to go a bit keen early days.

“He's learning how to relax and that's what I liked most about his trial the other day, when he was asked to pick up the last 300m he went to the line quite nicely.’’

Tommy Berry rides Mount Fuji, a $4.80 chance with TAB behind Rulership at $2.90 on Thursday, and if he happens to win he could earn the chance to recoup a chunk of his purchase price in the $2m Inglis Millennium (1100m) at Warwick Farm in two weeks.

“It looks a solid race, he's drawn a good gate to get a nice run,’’ Snowden said.

“He could be a bit closer, midfield or a touch closer and if he's doing that he'll get every chance to run well. I’m pretty confident he’s got the ability.’’

Mount Fuji is an $11 chance in TAB’s all-in Millennium market and both he and Rulership are $51 in Golden Slipper betting.

Rulership, a $900,000 I Am Invincible colt, accounted for the boom Ciaron Maher & David Eustace colt Prague in his latest trial and Snowden said he’s showing signs of being a readymade racehorse.

While the time in that trial wasn’t flash the champion trainer said Rulership has an attitude rarely found in unraced two-year-olds.

Rulership wins a trial at Randwick on January 9

“It was a slowly run trial, they only sprinted the last 300m of the trial but he showed his versatility because in the other trial he settled back second last,’’ he said.

“He could jump and lead or come from last, he has the ability to switch off. He has a good mind on him, he’s from a fast family but his best attribute is his attitude.’’

Peter Snowden’s comments on the stable’s other Randwick runners:

Napoleon Solo (race 5, $4.20): “He's stepping up to a mile and I think he is looking for it now, he's starting to grind a bit. Tom (Marquand) rode him well but he might have went a touch early on him.’’

Poetic Charmer (race 9, $8.50): “He would have run last week but the track was wet. He's a month between runs but for him the fresher he is the better he is. His work at home has been outstanding but he's done that before. He gets another chance.’’

Charretera (race 9, $6): “He's a real momentum horse, the race has to be run to suit him. He's a difficult horse to catch but if everything goes right he's good enough.’’