Robbie Dolan hasn’t made it to where is now by setting modest goals and in 2019/20 he’s aiming for a Group 1 win and to defend the apprentice title he’ll officially win in a couple of weeks time. 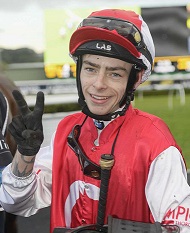 Ahead of another solid book of rides at Rosehill on Saturday, where he’ll be out to edge closer to a milestone 50 city wins for the season, Dolan said he’s been blown away by the ride in the last 12 months.

Given his fast rise through the ranks and with 28 more wins to outride his metro claim, Dolan said he's likely to extend his apprenticeship beyond the September 29 date he's due to finish up and chase a second title.

“I achieved more than I wanted to achieve this season,’’ he said.

“I always aim high. If you’re aiming low you only work as hard as you need to get to that low step but if you aim higher you work hard to get there.

“So more Group success will be a big thing for me.’’

Easy Eddie’s Group 3 Maurice McCarten win and Group 1 placing in The Galaxy this season are Dolan’s best efforts in the limited amount of Group races he’s contested so far.

While Dolan has been battling a heavy cold this week, forcing him to miss Thursday’s Kembla Grange meeting, he’s keen to be in shape for Rosehill and he’s excited about a number of his mounts.

Chief among them is Waking Moment, a mare with just one win from 20 starts but Dolan was rapt with her last start second behind Toryjoy two weeks ago and sees the ATC Member Tours Handicap (2000m) as a chance for the mare to break through.

“I know she’s only won the one race but a lot of her runs have been in Group races,’’ he said.

“The 2000m will definitely suit her, she a big strong mare and you can see how athletic she is.

“If she reproduces the run she did the other day she will be right in the finish. I know Primitivo will be hard to beat but I really fancy her and I was very happy to get back on board.’’

Waking Moment is on the second line of betting at $5, and another horse Dolan is looking forward to a second shot on is Port Macquarie filly Nashian in the Lindsay Murphy TAB Highway (1400m).

Nashian ($6 with TAB) produced an eye-catching first-up fifth behind stablemate Gumshoe at Randwick on June 22 where she ran the fastest last 600m of the race in 35.09 (Punter's Intelligence), more than four lengths faster than any other runner.

“She’s drawn a better gate and I think she will be a very good chance.’’

Robbie Dolan’s comments on a couple of his other Rosehill rides:

Nicci’s Gold (Race 7, $8.50): “I rode her at the end of last preparation and she was ready for the paddock. But her runs this prep have been very good and if you look at the Civic Stakes she was unlucky and got into a bit of trouble. It’s a similar field again and she will have her chance.’’

Southern Lad (Race 8, $5): “He’s only small but he’s a tough little fellow. He gets in well at the weights. He jumps and he travels off a strong tempo and can let down strongly.’’