Under ideal conditions co-trainer Adrian Bott says there’s a case for each of the Tulloch Lodge trio Riodini, Dawn Passage and Just Thinkin’ to be in the finish of Saturday’s $7.5m Iron Jack Golden Eagle (1500m). 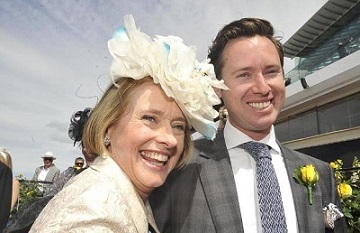 But there won’t be ideal conditions, we’re faced with a rain affected track, the forecast of more rain, and capacity field for Sydney’s second richest race and under that scenario Bott is happy to point to Riodini.

The ex-Kiwi four-year-old comes through the same race as the inaugural Golden Eagle winner Kolding with his third placing in the Group 1 Epsom Handicap (1600m).

“He went in there well weighted and it looked like a nice profile of a race for him, and it worked out that way,’’ Bott said.

“It’s been a long range target with him, he has a bit of wet track form over there which he is bringing over and he’s had the right lead up.

“Out of our three runners he’s had the best preparation leading into it.”

Riodini has been a work in progress. After a fair local debut in the Theo Marks he caught the eye with a second to I Am Superman in the Shannon Stakes before his gutsy third in the Epsom with 50kg.

Brenton Avdulla rode Riodini in a Gosford trial win that followed the Epsom and from barrier seven Bott says he will get every chance.

“He showed good tactical speed in the Epsom and the way he is going about things is a lot better each time,’’ he said.

“He is gaining confidence with racing at the moment, hopefully he can keep on that upward curve and keep improving.

“I think he is coming through the right form lines and we haven’t seen the best of the horse yet.”

Bott said Dawn Passage’s chances will hinge on the track condition as on the evidence of his only heavy track attempt he will need it soft or better to be most effective.

A first-up third in the Silver Eagle (1300m) told Bott that Dawn Passage is on target and he was topped off with a 1200m trial last week.

“He still had improvement to come out of that race and he looks to have taken it now,’’ he said.

“He’s come on in the right way with his work and condition. We gave him a trial in between to give him that bit extra we felt he needed.

“I feel he is right profile for the race, it’s a bit of an ask going there second-up but we’ve done plenty of work with him. He has a great turn of foot and acceleration and that’s dulled a bit with the wet tracks.”

Riodini is the most favoured with TAB of the Waterhouse-Bott trio at $19, Dawn Passage was $26 on Friday while Just Thinkin’ is the rank outsider of top 18 at $81.

That price is probably a bit offensive to Just Thinkin’, given he was Group 3 placed just over a month ago and ran third behind Purple Sector over a mile at his latest start.

Riodini runs third in the Epsom Handicap on October 3

It seems Bott would like the Golden Eagle to be real test to enhance his chances and despite drawing 21 in the original draw he says a wet track shouldn’t hold any fears.

“His family has all done really well in the wet so he is bred to get through it,’’ he said.

“He is very fit and tough, puts himself on pace and has a good racing pattern, he races well at Rosehill, and if the conditions are quite testing it will suit him.

“Back to the mile with blinkers on we saw an improved performance from him last time. It was good to see him bounce back.”

Bott said the charity component of the Golden Eagle is an outstanding concept – ten per cent of the prizemoney earned by each horse will be donated to a charity selected by their owners.

Riodini is racing for the National Jockeys Trust, Dawn Passage for the Children’s Cancer Institute and Just Thinkin’ for Riding For The Disabled.

All the fields, form and replays for Saturday's Golden Eagle meeting at Rosehill