Reith Ready To Reach For The Sky

Christian Reith has left no stone unturned in an effort to ensure in-form four-year-old Sky Boy earns his Doncaster exemption at Royal Randwick on Saturday. 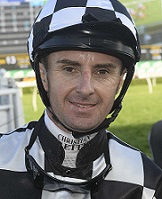 Sky Boy has been the revelation of the late spring in Sydney and Reith, with three wins from as many rides, has been working hard over the past few weeks to ride the 53kg in the Group 2 $250,000 Fugen Constructions Villiers Stakes (1600m).

“I rode 54kg on Wednesday without sweating. It’s not easy, I can’t do it week in week out but I’ll be going there fully alert and ready to go.

“I want to be cherry ripe for Sky Boy on Saturday.’’

Sky Boy is TAB’s $3.30 favourite to take out the Villiers and claim the exempt status for the 2019 Group 1 Doncaster Mile in April.

When you consider less than two months ago he won a Benchmark 70 at a midweek meeting at Randwick, followed by three more victories, he’s come a long way in a short time even though trainers Anthony and Edward Cummings have long held high hopes for the gelding.

The Cummings stable has given Sky Boy a strong grounding for the tough Randwick mile with those past three wins coming at 2000m (twice) and 1800m three weeks ago under 57.5kg, 60kg and 58kg.

Reith believes he’s the ideal horse for a Villiers especially given his will to win.

“Each run he’s got that little bit better, he’s maturing as he’s racing,’’ he said.

“I think the drop in weight is a big bonus for him, his tactical speed is a bonus and I think he has drawn perfectly. He will be strong over a mile and will be very hard to hold out.

“He’s versatile, he’s a better chaser at this stage but it doesn’t worry me.

“I’ll ride my own race on him, there’s a bit of speed drawn wide which will create a bit of speed. I think it is the perfect race for him.’’

Recent Villiers winners have vindicated their place in the Doncaster.

Reith is adamant Sky Boy has what it takes to hold his own in the autumn.

“It’s turned out to be a good field and will give a guide to where he’s at and how good he is,’’ he said.

“Everything leading into Saturday has been right, you have a horse in form, he has the will to win and it’s the perfect race for him.

“I think he can possibly be a top level horse.’’

All the fields, form and replays for Villiers Stakes Day at Royal Randwick