Perfection on a racecourse isn’t something easy to achieve but Regan Bayliss has attained it once on Libertini and knows lightning will need to strike twice to win Saturday’s $15m TAB Everest (1200m) at Royal Randwick. 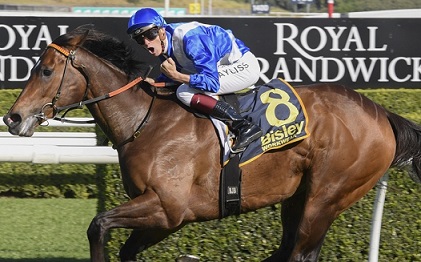 Bayliss made all the right moves on Libertini in her stunning Premiere Stakes win two weeks ago over the same course as she vaulted into TAB Everest contention and a few days later slot holder James Harron snapped her up.

He settled her handy, made Kerrin McEvoy on Classique Legend commit to a three wide run then slid onto their back around the turn before unleashing her trademark turn of foot.

In a perfect world Bayliss would love to repeat that scenario but barrier 12, the outside gate, is unlikely to afford him too many luxuries. Interestingly, he’s not overly concerned.

“She’s drawn an awkward barrier but you can take a few positives out of it,’’ Bayliss said.

“She’ll be out of the hustle and bustle and I can let her find a rhythm, if we can get a bit of cover somewhere and camp off that good tempo she’ll be running off some nice sectionals late.

“I have a few scenarios in my head but you don’t read too much into it until the barriers open.

“We are there to make quick decisions, I have a lot of faith in her ability so I’m looking forward to riding her and if we can get a bit of luck I know what she can do.”

Libertini was a short as $6 with TAB after the Premiere but with the wide gate has drifted to $10.

On Thursday morning Bayliss completed Libertini’s preparation for the TAB Everest with some ‘evens’ work over 800m at Randwick under the watchful eye of trainer Anthony Cummings.

“She’s done a lot of beach work, a couple of nice gallops to keep her up to where she needs to be,’’ he said.

“Her coat is starting to come through and she’s feeling good in herself.”

Cummings isn’t quite looking for perfection from Bayliss but is confident if she gets the opportunity to unwind as she did first-up she can more than make her presence felt.

It’s worth questioning whether she can reproduce such an effort given she broke 1:08 first-up last spring then couldn’t match the peak second-up.

“In the spring of her three-year-old year she came back a little bit off her first-up run into her second-up run but the intention that time is different to what it is now,’’ Cummings said.

“The routine is different in that we were heading towards a mile, it’s been a more specific preparation towards the 1200m.

“It’s fairly hard to predict what to do before because you are in the hands of 11 others. I’d expect her to be midfield but that’s up to Regan and to take the opportunities as they present.”

In Libertini’s favour is the fact that she’s the second youngest horse in the race - only Bivouac is younger - and with just 10 starts under her belt so is therefore open to the most improvement.

Cummings said he’s never doubted her talent, is certain there’s a Group 1 in her future and is adamant the TAB Everest should hold that standing.

“We’ve seen a lot of it here and get a fair idea but to the public she is yet to prove herself to in the fullest extent. She hasn’t won a Group 1 yet, I think it is ridiculous this race isn’t a Group 1.

“This is the fourth running and it’s been the highest rating (sprint) every year it has been run. For it not to be a Group 1 means the system isn’t working properly.”