He hasn’t ticked the two mile box yet but everything about Young Rascal, favourite for Saturday’s $1m Schweppes Sydney Cup (3200m), has told the William Haggas camp he’s a genuine stayer in the making. 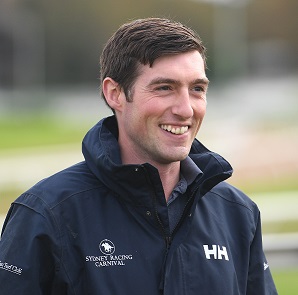 The five-year-old stormed to favouritism with a gutsy win under 59kg in the Manion Cup last month and travelling foreman Harry Eustace says he can’t wait to see what Young Rascal will produce at the extended trip.

Eustace revealed it was Haggas’ plan to test Young Rascal’s staying prowess well before now but for various reasons he’s yet to race beyond a mile and a half.

“If they aren’t quite mentally or physically ready it can knock them back. He didn’t fire last year and was a bit disappointing but we’d had a dry spring and that was partly to blame.

“His owner decided to geld him so he missed the flat season and came out in the back end and went to Kempton then Hong Kong. So he didn’t get a good nine months straight of being able to progress like we would have liked.”

It’s fair to say Young Rascal, $2.50 favourite with TAB, has taken to Australian racing and Eustace said everything about the horse now tells him that he is mentally ready.

He’s seen it as he’s matched motors with Addeybb in trackwork and in that Manion Cup win, which was essentially meant to be his warm up race, where he showed how tough he is under strong riding from Tom Marquand.

“He looks and gallops like a horse that would want a step up in trip,’’ he said.

“It’s not going to guarantee that he does but it helps if you’re a questionable stayer.

“We liked the way he knuckled down and Tom was delighted with the way he was at the line. He was just hitting top gear that final furlong.”

So he has plenty of respect for Raheen House though suspects Young Rascal may be a classier conveyance.

“Potentially, yes, but some of Raheen House’s form is very good,’’ he said.

“He has bits and bobs of very good form. I just hope if we can get a clear run with Young Rascal he might have a bit more quality.

“We get a bit of weight off Mustajeer which is probably right. I was taken with Raheen House, that was the sort of run we thought he could put together down here.

“He’s a horse that wants to get his toe in and wants a trip and it was the first time he’s got both. If it’s an honest gallop all the way he will be chiming in."

There’s no shortage of dangers to Addeybb when he takes on a crack field in the Group 1 $2m Longines Queen Elizabeth Stakes (2000m).

Like Young Rascal, Addeybb’s preparation has been timed to have him at his top for Day 2 of The Championships and Eustace said his Ranvet Stakes win, the Group 1 breakthrough for Marquand, was also a bonus.

“It’s more a mental thing with him, he needs a run to help switch him on and remind him he is a racehorse,’’ he said.

“That’s what was pleasing about seeing him win first-up down here.”

The Ranvet was very much a sit and sprint as Marquand controlled the race then sent Addeybb on a dash like he’s rarely seen before and he responded by running the day’s fastest last 200m of 11.16 (Punter’s Intelligence).

That showed the class that UK pundits had warned locals was there and Eustace said the gelding is far from a one trick pony so there’s no guarantee he’ll attempt another all the way win.

It’s all about having Addeybb, $4.40 with TAB, in the right rhythm and the need to get it right is paramount with a world class galloper like Danon Premium, among others, bearing down.

“I can see it being quite a searching gallop early on and we wouldn’t want to get sucked into that too much,’’ he said.

“They want to get into a comfortable rhythm early on then worry about the race in the second half without sacrificing gate one.

“If it is a more searching gallop that is the type of racing he is used to. The beauty of Addeybb is looking back through his races is he’s won from everywhere.

“He is very straightforward for a jockey and wherever he lands and is comfortable he will do the rest.”

There’s a chance Young Rascal could remain in Australia to be aimed at the spring staying features in Sydney or Melbourne while Haggas has said he wants Addeybb to return home.