Nothing but quotes from Godolphin's trainer James Cummings, as told to Sky Sports Radio on Friday, about his runners at Rosehill Gardens.

Lanigera ($5.50): "He won quite impressively (at Newcastle), it was a blistering performance. Whether 1100m on a wet track is going to be right up his alley I’m not quite sure. The prospect is he’s going to be full of running at the top of the straight.

"I have lots of respect for Spend, Vin Cox was under bidder on him at the sales. Two-year-old racing this time of year is always fascinating.''

Phaistos ($2.50): "(A soft track) would be more in his favour particularly with that big weight. He’s pretty tough and he’s looking good since his surging effort to finish second last time. The step up (in distance) should play into his hands nicely.'' 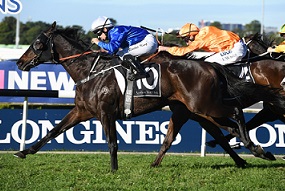 Deity ($5.00): "Up to 1100m will be better for her I think and I’d say the form out of her effort last week will be good, I thought it was a good enough race. She’s returned with two good runs now and looks to be ready to offer something a little more.''

Gaulois ($7.50): "He looks certain to get a good run, save his energy and enjoy the winter ground. Now we have got him back in winning form, I thought his runs in Queensland were all good, it has to give us that bit more confidence despite the fact we carry the penalty from his (Civic Stakes) win last time. I think he has to be one of the leading chances in the race.''

Almanzora ($7.50): "Robbie Dolan thought he had her in a rhythm (in the Winter Dash) and it was just about perfect in the early stages but he said there was an inch in it and she wanted to get a bit keen with him. You can’t afford to be keen in the middle stages on winter ground like that and she paid the price.

"She still looked a winning chance at the 300m as she ran into the race but loomed up and ran out of gas so she has to be better for that effort. I’d love it to be 1100m for her but she is going to have to get out there and prove she can run that six furlongs now.''

Wagner ($6.00): "He’s going to have to enjoy improving ground for him to be at his best. He didn’t knock him around, Tommy (Berry), last time convinced the horse wasn’t responding on the ground. He’s shown that in the past but really proved it last time so I’d need to see the ground better for him.''