If the Festival Stakes is a reliable lead up to the Group 2 Villiers Stakes then the runs of Through The Cracks and Sambro have to stand out.

Punter’s Intelligence sectional data showed Festival favourite Through The Cracks ran the fastest last 600m of the race (33.78) and by almost a length after settling second last.

On that performance, his first at Group level, he’ll be very hard to beat at the Randwick mile and particularly if he can draw well.

Sambro was first-up from a spell in the Festival and finished just ahead of Through The Cracks on the line, his last 600m of 33.93 was the race’s second best and he was the only other horse to break 34 seconds.

He covered the most ground in the race, an extra 9.7m. He’s yet to win second-up but was narrowly beaten in the Scone Cup at a mile at his second run last preparation. 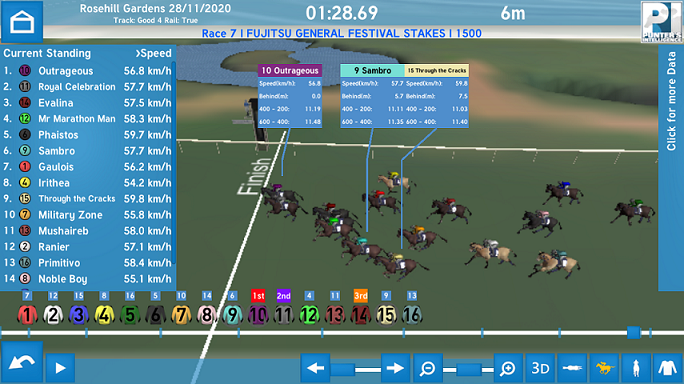 The Rosehill Bowling Club Handicap over the 1500m was run considerably slower than the Festival, by more than three lengths, and it was Fulmina who starred first-up from a spell.

Not only did Fulmina cover more ground than any other runner, an extra 10.1m, she posted easily the fastest last 600m of the race in 34.15 (by over a length) as she charged into third place.

The Listed Starlight Stakes (1100m) realised the meeting’s fastest last 600m and that was Viridine’s 33.23 as he ran into third place after tracking wide.

Third placed Hunnam does have something to work with, he clocked the fastest 400m-200m of 11.28 but weakened with a last 200m almost two lengths slower than the winner.

Threeood appears in for a big summer preparation after her outstanding first-up win in the Iron Jack Handicap (1100m).

Her overall time wasn’t far off the Starlight over the same trip and she did it sitting wide worse than midfield and with nothing to follow into the race.

This mare is effective up to 1400m so far and she can only have improvement in her and there might be a nice win in her this summer.

A hidden run out of that race might be from Valdostana who only beat one horse home but ran a last 600m of 33.86, she was 31m off the lead at the 600m and was beaten six lengths. Her second-up record is handy and she could be an improver.