All eyes were on TAB Everest bound Classique Legend as he made a winter cameo winning Saturday's Listed Bob Charley AO Stakes (1100m) at Randwick and he got the job done.

As it turned out the wide barrier was an advantage and Punter’s Intelligence data showed most of the field covered around an extra 10m in the run.

From a sectional point of view the classy grey wasn’t the stand out, he ran a solid 35.10 which was the third fastest of the race, though he did carry 60kg and concede 7kg and 4kg to the placegetters respectively.

He did what he had to do and we’ll have to wait and see how his second TAB Everest attempt pans out later this year. 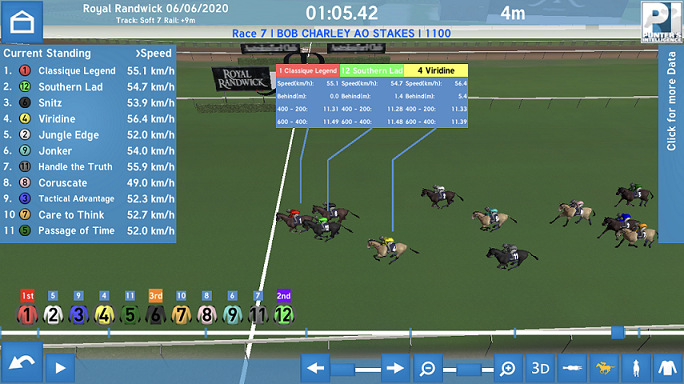 Chris Waller signalled Achiever could be a Spring Champion Stakes horse after he broke through in the Castelvecchio @ Arrowfield Handicap (1400m).

It was a dominant performance that was hard to predict leading in, he’d run well in all four starts but his heavy track fourth to Peltzer two weeks earlier you’d say was an even effort.

Regardless, he smashed his seven rivals and his last 600m of 35.95 was four lengths faster than anything else in the race.

So the bar of expectation has to be raised on Achiever when we see him in the spring.

There’s a TAB Highway win in Keen Power after another slashing second, this time coming from near last over the 1100m.

He was about 20m off the lead at the 600m and rushed home in 35.94 which was well over a length faster than his rivals, worth noting he had to do some ducking and weaving but also ran the fastest last 200m of 12.65.

The hidden run in the Highway came from Dubai Tycoon. He was first-up and was back last as close to home as the 150m and was only getting warm at the finish running 36.39 for his last 600m.

It was another inch perfect front running ride from Chris Williams on Oakfield Twilight to make it successive all the way wins in the Calyx @ Coolmore Australia Handicap (1200m).

Worth noting Oakfield Twilight ran 1:12.86 compared to Wandabaa’s 1:13.25 over the same course so all honours to him.

Out of the Wandabaa race the run of Voila was eye-catching.

Opacity stamped himself a horse to follow come the spring with a tough win in the TAB Handicap (1600m), his last 600m of 36.62 was clearly the race’s best and no surprise his last 200m of 12.35 was also number one as he finished too well.

He covered an extra 20m in the run, five of the first six home travelled an extra 20m or more with Greek Hero the exception (+11.6m), though worth noting the overall time was a second slower (six lengths) than Dealmaker one race earlier.