The most interesting aspect of Mister Songman’s runaway win at Randwick on Saturday isn’t that he almost broke the course record but that it included the slowest time for one of the seven 200m splits.

Mister Songman stopped the clock at 1:20.55 which was 0.22 outside Trapeze Artist’s course record.

That 1400m contest was run in stark contrast to Redouble’s victory in the preceding race over the same course. 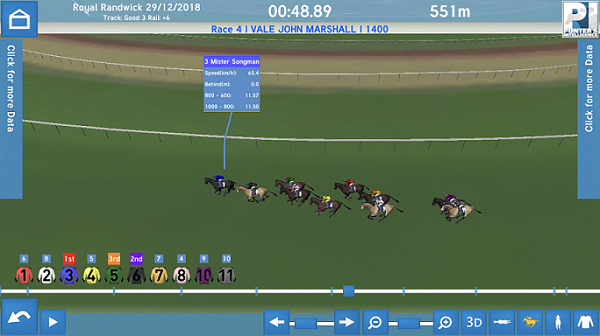 The Country Championships series kicks off in early February and Cameron Crockett has two worthy contenders in the shape of Ori On Fire and Andy’s A Star who ran first and third in the Highway (1100m).

Ori On Fire contested the 2018 series and was unlucky not to make the final running third in the Mudgee heat and fourth in the Muswellbrook Wild Card.

The up and comer Andy’s A Star was having just his sixth start and, while the track was producing quick times, a Highway runner clocking a 33.86 last 600m is worth taking note of.

He settled well back and was noticeably wayward around the 300m which adds merit to his race best last 600m.

It was a smart ride by Hugh Bowman too as he clicked Alizee into gear by running the fastest 800m-600m of 10.61 to put her into a striking position. She ran a sizzling 10.83 from the 400m-200m before clocking off when the race was won.

Stayer Berdibek ran right up to his excellent first-up performance with a narrow defeat to Tip Top over a mile. Only the winner (34.51) ran a faster last 600m than the grey (34.79) and that horse had his back all the way.

It’s worth highlighting the run of Sir Plush in holding fourth, in leading he ran 35 for the first 600m (just 0.23 slower than Mister Songman in his 1400m event).

Sir Plush finished the race with a last 600m of 35.70 so his effort to keep going was sound.