There were some eye-catching runs behind her but you can’t go past Sweet Deal as the run of the race in winning the $1m The TAB Hunter (1300m) at Newcastle on Saturday.

Punter’s Intelligence sectional data revealed the mare responded to being ridden with cover by clocking the fastest last 600m of 33.24 in winning the feature sprint and to top it off she also owned the fastest last 200m, 11.30, of the meeting.

Third placed Asiago’s run contained plenty of merit and the ride by Kathy O’Hara should earn praise too after slotting her in midfield from a wide gate.

Interestingly the Hunter was run in a slower overall time than the Hunter Valley Premium Meats Benchmark 88 won by Through The Cracks.

The first 500m of the Hunter with Cuba and Special Reward setting the pace was run in 30.83 while Edison, who held on to run second, put the same section behind him in 30.01 or five lengths faster. 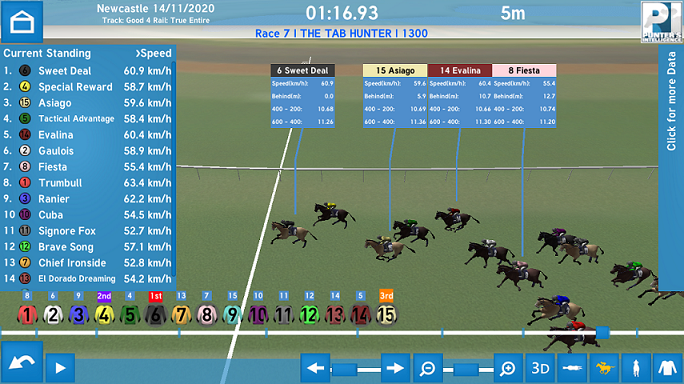 Miss Einstein backed up her excellent first-up run with a sound third in the Bass Floor Handicap (1400m) where she clocked the race’s fastest last 600m of 34.68.

That time was almost two lengths faster than the next best, runner-up Enchanted Heart (34.99), and she also ran an 11.85 last 200m to be clearly the fastest for that sectional as well.

Elsewhere at the Newcastle meeting, the win by Super was just that in the Hungerford Hill Handicap (1600m) and you’d think if he backs up at Kembla Grange this Saturday he’ll be hard to beat again.

Behind him there may have been a hidden run from Shadow Flight who finished in 11th place but owned the race’s second best last 600m of 33.90 and the fastest last 200m of 11.43.

The race’s fastest last 600m went to Darleb, 33.96, and his finishing position of seventh is misleading as he was badly held up for a run in the last 100m or so and went to the line hard held.

Then there’s Superium who, despite doing plenty of ducking and weaving, ran a 34.18 last 600m which was the race’s second fastest, while his last 200m of 11.67 was also second best.

Full sectional information for the meeting can be found here as a technical issue meant races 1 and 9 were unable to be uploaded to the app.

Most ground covered (to win): Through The Cracks +28.8m