The washup from the $1m The Gong at Kembla Grange has to be that Archedemus was a comprehensive winner but there’s one horse we need to remember for the autumn.

Punter’s Intelligence sectional data highlighted the gutsy win by Archedemus in the 1600m feature, a race run not quite brutally but at a testing pace, with the first 600m run in 36.61 compared to the following 1600m event run in 37.22 so almost four lengths faster.

By the end of the respective races, The Gong was run 1.33 seconds faster (eight to nine lengths) so the open class horses really kept the pressure going.

Significantly, while Archedemus was able to sustain his run on the speed the leader, Positive Peace, dropped out to run second last. Archedemus ran a last 600m of 34.38 which was only tenth best of the race but refused to be beaten.

At around the 600m he held a margin of about four lengths over the eventual runner-up Dawn Passage and it was just enough as that horse’s last 600m of 33.85 was just under three and a half lengths quicker.

The horse to mark down for the new year is Brandenburg who clocked the fastest last 600m of the race running 33.43 (two and a half lengths faster than Dawn Passage’s second best) and only one horse covered more ground in the run.

He was the only horse to break 11 seconds (10.79) from the 400m-200m. It’s worth noting that trainer John Sargent plans to have the Doncaster placegetter gelded in his break. 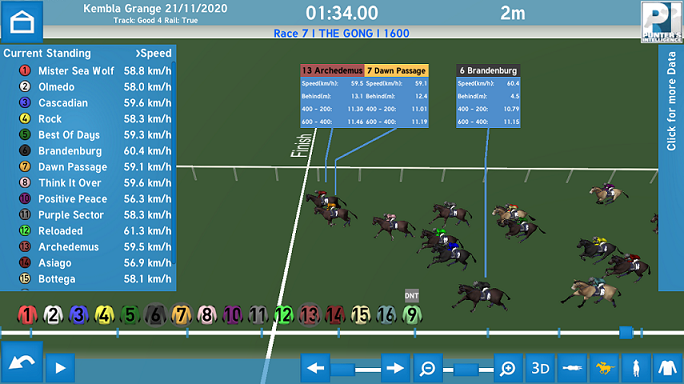 Greek Hero will be in everyone’s black book after his third in 1400m Benchmark 78 to round out the program.

Air To Air goes for a break in a good space after running a 33.99 last 600m to finish second off a track record pace in the Canadian Club Handicap (1500m).

There has to be a maiden win, or a TAB Highway, in the near future for Diorissima who was the standout from the 1600m Class 3 Highway at Kembla.

Chris Waller has worked some magic on Hulk who is racing so consistently and he was responsible for the day’s fastest last 600m (32.44) in winning the Evergreen Turf Australia Handicap (1000m).

The big prize eluded John Thompson at Kembla but he’ll be winning races with Dunbrody Power who was outstanding in running fifth in the Traffic Logistics Handicap (1200m).

The run backed up a first-up win and while, as a backmarker, she often needs the breaks it appears she’s gone up a notch this time in.

Adding further merit is a comparison between the two Benchmark 78 races over the 1200m.