When you lead and run the fastest last 600m of a race you’re invariably the winner – that was the story of Farnan’s win in the Group 1 $3.5m Longines Golden Slipper.

Hugh Bowman signalled his intention early as Farnan posted easily the fastest first 200m of 13.49 (0.09 clear of the field) and he didn’t back it off significantly at any stage.

The colt clocked the fastest last 200m of the race running 11.58, faster by about a length, so it was no surprise he raced away for a dominant win.

Third placed Mamaragan, having just his second start, marked himself as a horse of the future as he ran a 34.28 last 600m which was just 0.01 slower than the winner’s race best time.

Addeybb’s Group 1 win in the Ranvet Stakes followed the same formula as Farnan’s Slipper win – he led and clocked the race’s fastest last 600m and it was a masterful ride by Tom Marquand.

The import posted 33.27 for his final 600m in a race that was a sprint home. Addeybb ran the first 1000m in 1:06.57, slow by anyone’s measure, but he got going early and that was the key to him outmuscling Verry Elleegant who looked to have him cold.

The change came from the 800m. The pair ran identical splits of 13.01 between the 1000m and 800m but it was Verry Elleegant who was bluffed into doing the early work. 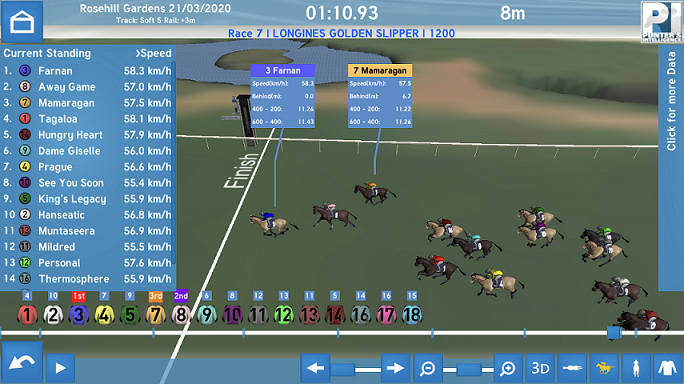 His last 600m of 33.27 was just a tick faster than Verry Elleegant’s 33.29 and a points decision to Tom Marquand for taking the mare out of her comfort zone and putting her right into Addeybb’s.

Castelvecchio was right back to his best winning the Group 1 Rosehill Guineas (2000m), also thanks to a superb ride from Craig Williams, but it might be wise not to write off the beaten favourite Shadow Hero.

Whether they have a return battle in the Australian Derby remains to be seen but both three-year-olds are clearly going very well.

Another forgive run came from Te Akau Shark who, despite running third, posted the fastest last 600m of 33.74 as he just shaded runner-up The Bostonian (33.75) for that honour.

The winner Dreamforce took the result out of the Shark’s hands early on, once he’d established a lead jockey Nash Rawiller was able to drop the tempo by six lengths in the time from running 11.40 from the 1400m-1200m and 12.39 from the 1000m-800m.

Rawiller was then able to up the tempo sufficiently in the second half of the race for it not to matter that he ran the third slowest last 200m of 11.73.

There were several other standout performances that suggested wins aren’t far away:

Supernova’s last 600m in the Manion Cup of 33.58 was over two lengths faster than anything else in the 2400m contest.

Dawn Passage’s final 200m of 11.46 was about a length superior in the Darby Munro as he ran on from last into second.

And Pierata lost no admirers with his 59kg in the Group 1 Galaxy running 33.15 for his last 600m as he finished a close fifth.

Leeton-based trainer Peter Clancy has reported that rider Brianna Burke was dislodged during trackwork at his home track this morning ...
Read More

Racing NSW Stewards have conducted an inquiry into two Analysts’ findings of cobalt, at a concentration in excess of 100 ...
Read More