All honours to Sneaky Five for a strong win in the $1m Golden Gift (1100m) at Rosehill on Saturday but there’s plenty to look forward to from the two-year-olds behind her.

Punter’s Intelligence sectional data showed the beaten favourite Captivant ran the fastest last 600m of the Golden Gift of 34.61 and the best last 200m of 11.74.

You could argue that Captivant wasn’t overly comfortable in the conditions, that can be judged later, but to produce race best sectionals says he’s a real talent.

Not far behind him was the debutant Head Of State, the first Australian runner by American Pharoah, who clocked 34.66 for his last 600m.

Sneaky Five enjoyed the run of the race behind the leader, took over with a sprint from the 400m-200m of 11.26 and had a big enough break to hold them off. 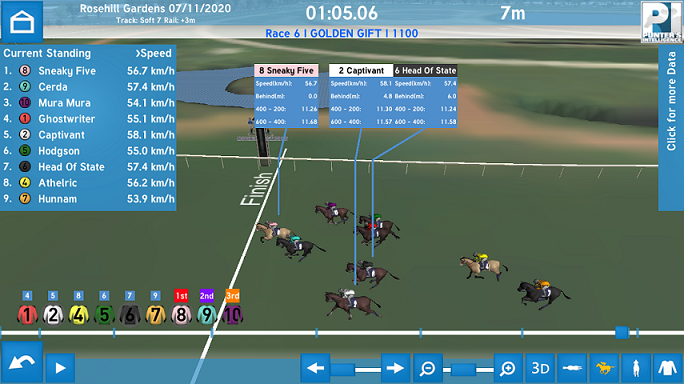 An on pace racing style proved decisive for Savatiano in the Group 2 Hot Danish Stakes (1400m) who ran 35.17 for her last 600m, the second best in the mares feature.

Runner-up Tricky Gal was by far and away the standout from a sectional perspective, running 34.55 or almost four lengths faster than the winner.

The final two races were run over 1300m and they were run very differently.

Frosty Rocks led all the way to win the Iron Jack Handicap going fast enough early to gain control, his first 500m was run in 31.51, then Tom Sherry backed it right off for a furlong before putting the foot down and kicking clear.

That race was run just over a second faster, or more than six lengths, than the Chandon Handicap won by Misteed. The first 500m in the final event was 31.86 so they were entitled to sprint home.

Out of the final event Ruby Tuesday produced easily the fastest last 600m of 33.90, a length and a half faster than anything else. She has a habit of being slowly out and can produce a fast final sectional but with a 68 rating she can be well placed to win races this time in.

It’s not often a horse’s last 200m is their fastest sectional but that was the case with Accountability who sprinted sharply late to win the Kia Handicap (1800m).