Golden Slippers aren’t won two weeks before the world’s richest two-year-old race but Profiteer’s co-trainer Mick Price says what happened on, and since, March 6 has him believing he can. 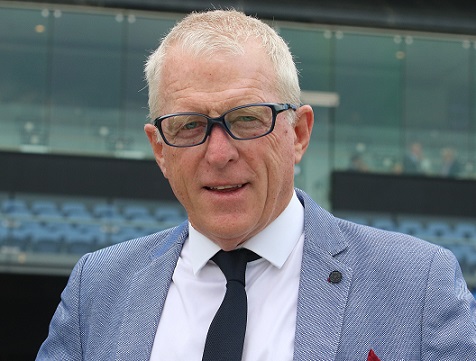 March 6 was when Profiteer lost his unbeaten record in the Group 2 Todman Stakes (1200m) at the hands of Godolphin colt Anamoe but Price, who co-trains with Michael Kent Jnr, said as much as he wanted to win the race ultimately it was the semi-final and should be assessed as such.

Price pointed out of the 28 days between Profiteer’s easy Inglis Millennium win and the Todman he spent 10 of them in the paddock so was always going to have improvement.

“I think you have to remember I used the Todman to get him into the Slipper,’’ Price said.

“He blew for 25 minutes after the Todman and I think that was where he should have been.

“I wanted him to win and improve rather than gun him for the Todman. Even though he was beaten it was more or less what we wanted to see from him.”

In the Inglis Millennium back in early February the colt tended to want to charge early but broke the field up and was simply a class above.

Price and jockey Hugh Bowman are wary he will need to conserve some energy early to fend off the best youngsters around so in the Todman it pleased Price to see after Profiteer opened up a three length lead midrace that he settled.

“I thought Hugh got the first half of the Todman right,’’ he said.

“He’s a fast horse and he flies the gates. He said he wanted to get going a little bit and he asked him to come back and he came back.

“The problem is if you ask them to come back and they don’t.

“It was a very stressy day in the Millennium and a hard run. He refuelled and the Todman has brought him on, I think he goes into the race spot on.”

Interestingly, Profiteer’s sire Capitalist was also beaten into second place in the Todman before winning his Slipper in 2016 and the colt will be carrying the same colours as last week’s Group 1 Coolmore Classic winner Krone.

After coming up barrier five in Tuesday’s draw for the Group 1 $3.5m Longines Golden Slipper (1200m) the colt ($4 equal favourite with Stay Inside) will have every chance to hand Price his first Slipper after trying with some very smart youngsters.

“No doubt about it, this is my best chance to win the Slipper,’’ Price said.

“He’s a two-year-old that has had an ideal prep to try and win it. I’ve won two Blue Diamonds and it is difficult to win both races.

“He could have gone down to the Blue Diamond but I don’t think it would have been right to do so and that’s why we put all our eggs in the Golden Slipper basket.”

Price revealed Profiteer’s final gallop on Tuesday at Rosehill morning consisted of 800m, with a Gerald Ryan-trained companion, run in 48.86.

Profiteer runs second in the Todman Stakes at Randwick

“I don’t need him to be going any quicker but it’s always a good sign when two-year-olds want to find the line with more up their sleeve,’’ Price said.

“He’s fit and is as well as we can have him, we’ve just got to hope he is right on the day.”

Bowman, chasing successive Golden Slippers after winning his first last year on Farnan, said Profiteer proved to him in the Todman he can run a strong 1200m.

“He’s a very casual horse, he’s a very fast horse which is what you want for this particular race,’’ Bowman said.

“We are mindful there will be much better horses chasing him this Saturday than they were (in the Millennium), we think he is up to the task and the way he went (Tuesday) morning we’re very excited about his prospects.”

The field, form and replays for Saturday's Longines Golden Slipper at Rosehill