Payne Keen For Gleneagles To Soar In Clarendon

Trainer David Payne isn’t exactly sure why he was chosen to take over the career of lightly raced youngster Gleneagles but isn’t about to look a gift horse in the mouth as the youngster chases back-to-back Hawkesbury wins on Saturday. 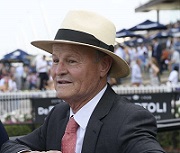 Gleneagles, who tackles the St Johns Park Bowling Club Clarendon Stakes (1400m), is one of about half a dozen horses handed to Payne by Singapore owner Mr Chua Song Ru’s Aramco Racing outfit.

“Straight after his last race he phoned me and asked would I take the horse,’’ Payne said.

“The horse was quite shin sore when he arrives so there could have been excuses for him.

“He’s given me five or six horses, the German horse (Thorin) I trialled the other day, some nice horses. I did train for him years ago but the horse was no good and I think he appreciated the honesty.

“I’ve never met him, I just talk to him on the phone.”

The colt debuted as favourite in the Wyong Magic Millions in December and finished second to She's All Class before his fifth to Queen Of Wizardry in a 1200m two-year-old event at Eagle Farm on January 2.

Payne elected to scratch Gleneagles from Warwick Farm midweek to concentrate on Hawkesbury and he was rapt to see Overpass win that race on Wednesday given his colt held a comfortable length margin when they met on April 5.

“He’s a very nice horse and I think he is above average. I am testing him to see if he is good enough to go to Brisbane. It’ll give us a good idea.”

The Clarendon Stakes has been known to throw up a smart horse on occasion, most notably Zoustar won the race in 2013 while in 2018 Graff was successful then four starts later ran fifth in the TAB Everest.

Gleneagles, $2.50 favourite with TAB on Wednesday, jumps 400m from his first-up win but given Payne’s goals and his training style he said that’s no issue come race day and he expects to be able to make some use of barrier one.

“He’s the had work, he’s had the grounding, so that never worries me,’’ he said.

“He gives every indication that he wants further than 1000m and 1100m in the way he races.”

Ex-Singapore galloper Charge is another of the Aramco brigade in the Payne yard and he has his second start for the Rosehill trainer in the Listed $140,000 Hawkesbury XXXX Gold Rush (1100m).

The five-year-old, $61 with TAB, had his first 14 starts for Chris Waller, winning a Group 3 level, before being sent to Singapore where he won one of five.

Payne said he will need to improve on his first-up seventh, beaten 4.4 lengths by Enchanted Heart and Lost And Running, at Canterbury but is capable if he gets in the right zone.

“He’s a horse that just bolts, but he is well and if he can get to the front I think he will be competitive,’’ he said.

“You’ve got to have him relaxed. If he doesn’t get to the front as long there’s a lot of speed and he’s relaxed behind them he will be fine.”

Gleneagles wins at Hawkesbury on April 5

As for Payne’s remaining Hawkesbury runner Costello ($26, Hawkesbury Gold Cup) he said the gelding has come back from a spell in good order but as his form suggests may need the run.

He trialled at Rosehill on Monday, pleasing Payne with his patience and barrier manners.

“We gave Costello a nice long break thinking about late in the carnival and maybe going to Brisbane. He’ll definitely improve on what he does on Saturday,” he said.

All the fields, form and replays for Saturday's Hawkesbury meeting