Josh Parr heads to Randwick on Saturday hoping Nakeeta Jane can bring down star colt The Autumn Sun but warns not to judge her harshly if she doesn’t. 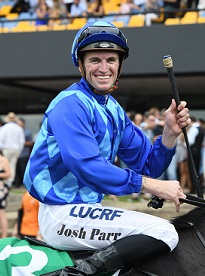 The super colt versus the emerging filly will be the focal point of the Group 1 $1m Mostyn Copper Randwick Guineas (1600m) and Parr is excited about the contest.

“We have to be very respectful of The Autumn Sun because his record speaks for itself,’’ Parr said.

“I’m not sure if it is all that fair on Nakeeta Jane that people will use The Autumn Sun as a yardstick. He’s a proven three-year-old already and Nakeeta Jane is still on the way up.

“At the start of this preparation we were excited about the filly we’d have at 1600m and beyond.

“After two runs we’re happy she’s won these two races but then you think back eight weeks and Mark Newnham and I were thinking we can’t wait until she gets to a mile.’’

When The Autumn Sun claimed his second Group 1 win, the Golden Rose back in September, Nakeeta Jane had just a few days earlier won a midweek maiden.

So Nakeeta Jane’s star has risen quickly in the past month with a dynamic first-up win in the Group 2 Light Fingers Stakes (1200m) then last week’s gutsy Group 1 win in the Surround Stakes (1400m).

Parr said what made the filly’s Surround win so impressive was her ability to pick herself up and sprint after a decent bump on the home turn.

“The position we ended up in, worse than midfield three wide with cover, wasn’t too bad because there was no speed in the race,’’ he said.

“Where it all went pear shaped was on the point of the corner.

“There was a chain reaction out to Nakeeta Jane and it sent her about four horses wider than I’d have gone if we didn’t receive the interference.

“While that was happening, Fundamentalist was off and gone.’’

That performance earned the filly the respect to be $5.50 second favourite behind The Autumn Sun ($1.65) with TAB and the chance to become just the second filly (after Mosheen in 2012) to win the Randwick Guineas in its current form.

Nakeeta Jane had to run the quickest sectionals of the Surround to arrive in time and Punter’s Intelligence shows she clocked 33.54 for her last 600m and a last 200m of 11.34. She also covered 5.2m more than the runner-up.

Parr isn’t so concerned about drawing the outside barrier in the nine horse Randwick Guineas.

He’s no stranger to giving a superstar a fright – think back to Winx picking up Red Excitement in the 2017 Chelmsford Stakes – but says you can’t focus on just one horse.

Nakeeta Jane wins the Surround Stakes at Randwick on March 2

“I’ll have an open mind. It’s not all that bad drawing nine of nine,’’ he said.

“I think nine of 13 would have been worse, you have to make a decision because there are horses on your outside putting pressure on you.

“I’ve got so much time to work out the speed of the race and work out where I’m going to be.’’

Trainer Chris Waller says he couldn’t be happier with how The Autumn Sun has come through his gripping first-up win in the Hobartville Stakes (1400m).

He said the colt is a couple of kilograms heavier and showed he’s come on in condition with some strong trackwork under Kerrin McEvoy this week.

“It was great to see him show a bit of speed and quicken at several points through the gallop, showing that he is a very responsive horse and hence the reason why he is such an exciting racehorse,’’ he said.