Nursery Chance For Cummings And Sunborn To Make A Mark

Edward Cummings only has to look within his family to be spoilt for choice when it comes to training mentors but as a role model for starting his business the first year trainer points to Mark Newnham. 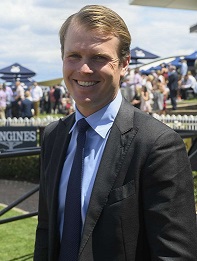 Edward Cummings has Sunborn in the Inglis Nursery at Randwick. (Pic: Bradley Photos).

And Newnham will be among the established trainers that the 33-year-old grandson of the legendary Bart Cummings will be trying to topple when his unbeaten filly Sunborn lines up in the $500,000 Inglis Nursery (1000m) at Royal Randwick on Saturday.

A year ago Cummings held the Villiers trophy aloft with his father Anthony after they prepared Sky Boy to win the Group 2 mile and he says it’s evolutionary to have a feature race runner at Randwick on the same day.

“It's 12 months on after making the announcement we were splitting up and I was going my own way, it hasn’t been an easy process but it’s been a process I’ve enjoyed,’’ Cummings said.

“I’m still realistic, we are taking on some very well established stables.

“I think Mark is someone to look up to, I think there is a lot to be learned from the example of guys like him.

“A lot of people probably sit back and think ‘Mark has done a really good job, it must be pretty straightforward’.

"If you have a proper grounding with a good stable then you understand the top to bottom of those businesses."

Cummings had his first runner from his Hawkesbury base in March and interestingly both his winners so far have been two-year-olds.

Sunborn, a $58,000 purchase, attracted support at her debut at Newcastle on December 1 and justified it with an impressive victory in a 900m scamper that Cummings says was more or less an educational venture with the Nursery in mind.

“The biggest thing was that she was strong late,’’ he said.

“She made a blue coming out of the gates, bunny hopping slightly, she needed to be pushed up to stay in behind the speed then sent along by Glyn (Schofield) to keep picking up and stay with the leader.

“She was taught on the fly how to go past a horse in front and that’s a big reason we decided to go to the 900m at Newcastle, I wanted it to be another trial type experience.

“I didn’t know she would be as competitive as she has been. Once I saw her put it together in a jump out two or three months ago I was confident a race like the Nursery would be well within her reach if she kept doing the right thing.

“Since she stuck her head out and won that race and ran through the line she has really come on at home.’’

The filly, part-owned by Cummings, opened $14 with TAB in the Inglis Nursery and a competitive performance would set both horse and trainer up for an exciting 2020.

Cummings has already had something of a taste of winning the two-year-old event through Diamond Earth who won the 2011 edition for his father and went on to be a dual stakes winner.

“If she was to run well in a race like this you have a lot to look forward to and we’d be able to comfortably map out a plan for her,’’ he said.

Sunborn wins on debut at Newcastle on December 1

“She’s a young horse and we probably haven’t drawn to advantage, but she has a lot of improvement ahead of her and there’s no pressure on her to win.

“If she’s good enough to do it then all’s well but I’d like to see her hitting the line strongly and putting her hand up for races over a bit further in a few months time.

“In my wildest dreams I couldn’t imagine having a Slipper runner but if she was to go on with it she could be.’’

Interestingly, Newnham had a Slipper runner in his first full season of training and now has a couple of Group 1 wins on his CV and a stable full of promising horses.

Cummings has around 14 horses in work at Hawkesbury, and building, so if Sunborn is in the finish on Saturday it’ll be a timely boost for the stable.

“I was going to the yearling sales trying to find value horses who have the physique and the pedigree to do well as two-year-olds and she was one who stood out in that sense,’’ he said.

“As conservative as I have been with her she continues to put her hand up to say she wants more either by her work or her appetite or general demeanour.

“It’s nice to have a horse like that in your first full season, one you’ve bought and syndicated and I’m a part owner, it’s a huge thrill.’’