Trainer Mark Newnham is adamant the All Aged Stakes is a Group 1 up for grabs and finally drawing a favourable barrier with Lanciato has swayed him into tackling Saturday’s Royal Randwick feaure. 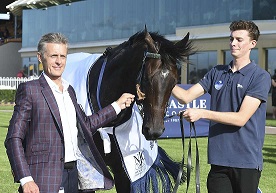 Lanciato is blessed with a dazzling turn of foot and Newnham said the cards might be falling into place for the six-year-old to prove he’s up to top company.

Newnham dual accepted in the 1200m Hall Mark Stakes but conceded his barrier there (nine of 13) meant he couldn’t win that race.

“I didn’t think he was any better chance of winning the Hall Mark than he was the All Aged,’’ Newnham said.

“Mainly because he’s never won at 1200m, the draw meant he was going to be last again and we’ve seen over 1200m when he gets back to last he just can’t make up the ground.

He’s only raced at Group 1 level twice and they were in the Doncaster and Epsom of 2018.

“You don’t get many chances to run in Group 1s at your ideal track and distance, and track conditions, so we might as well take a chance,’’ he said.

“He shows in his sectionals that he is capable but he is at a level now where he needs everything to go right for him to win. That could be true for a few of them.’’

TAB considers the gelding to be an outsider in the last Group 1 of the carnival at $34.

However, his last run at weight-for-age saw him run fourth behind Pierata and Kementari in the missile Stakes at the start of the season and Punter’s Intelligence data showed on that occasion he ran a last 600m of 32.60.

Newnham has kept Lanciato fresh since he ran fourth in the Group 3 Newcastle Newmarket (1400m) on March 8 after settling near the tail and he resurfaced a couple of weeks ago with a rousing barrier trial win.

“He was a fraction disappointing at Newcastle but giving weight and a start is really hard,’’ Newnham said.

“I know it is weight-for-age but a few of these horses have had a few runs now and we are coming in on fresh legs.

“He’s always very good off a bit of a freshen up. He’s in as good shape as he can be, he galloped really well on Monday morning.

“Josh (Parr) has been doing a bit of work on him and I asked him in the trial to push him into it a bit. He has got used to flopping out the back and that’s mainly been because of the barriers.

“It’ll be good to take advantage of a better gate. You don’t want to push him into the box seat because it nullifies his finish, he needs to be in a position where it is not impossible for him to win.’’

Meanwhile, Newnham said he would be disappointed if Greysful Glamour didn’t show a return to form back on a dry deck in the Group 3 $160,000 Cellarbrations Frank Packer Plate (2000m).

Last year’s Victorian Oaks runner-up struggled in the heavy ground beating one home in the Group 1 Vinery Stud Stakes (2000m) and is a $23 chance with TAB.

“I’d expect her to run a lot better this week. She has always worked well but she finally got to her right trip the other day and ran into very heavy ground,’’ he said.

“As you’ve seen from (stablemate) Scarlet Dream they can come off that track and improve a lot. I put blinkers on her on Monday morning and she worked terrific.

“I have no doubts about how well she is going but she just needs a few things to go her way.’’