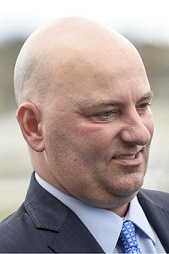 Commander could lay claim to the tag of honest campaigner so far but Thompson believes the four-year-old reacts well to a show of strength.

“I like the booking of Nash, he’s come back and is in form,’’ Thompson said.

“The horse goes well with a strong rider on and they don’t come any stronger than Nash.’’

If Rawiller is the edge that Commander needs to find an extra length or so then Thompson expects him to be hard to beat in the Events By ATC Handicap (1550m) where he was $4.20 with TAB on Friday.

There’s a change of venue worth noting when it comes to Commander’s chances.

Thompson said the gelding spent the time between his Grafton Guineas second placing and his third behind Travancore at Warwick Farm on July 31 at the farm but he’s been back in the stable since that last appearance.

“He’s a horse that thrives in a stable environment and he stayed here between these runs,’’ he said.

“He did well at the farm but he probably did too well.’’

Stablemate Thy Kingdom Come has found the ‘Goldilocks’ scenario in the TAB Handicap (1400m), according to Thompson.

The five-year-old endured a wide run and knocked up when he ran fourth behind The Party Girl at Randwick two weeks ago.

“He’s third-up, he’s coming right, I probably thought he was right the other day but he just had a bit of a tough run in transit,’’ Thompson said.

“He moved up like he was going to win but he just died on his run. He’s in the right race, beaten most of the field before, barrier one, James McDonald, it ticks a lot of boxes.’’

Thy Kingdom Come returns to the scene of his easiest win to date – he posted a five length win on the Kensington track over Love Shack Baby just prior to Christmas.

Thy Kingdom Come runs fourth at Randwick on August 3

He’s the pre-post favourite at $3.70 with TAB and Thompson expects him to be hard to catch.

“He’ll go forward and make his own luck,’’ the trainer said.

“I think he goes better when he gets the fence so barrier one is a good draw for him. You can just let him go, if you’re off the fence you have to hold onto his head and he can resent that.’’